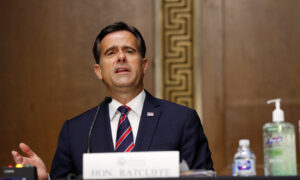 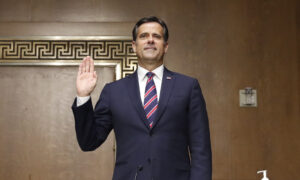 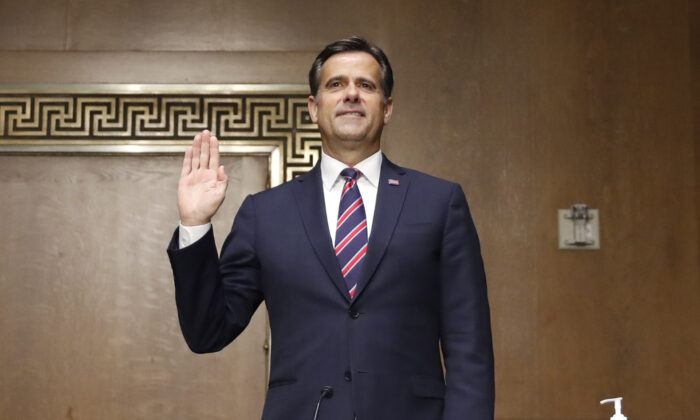 Rep. John Ratcliffe, (R-Texas), is sworn in before a Senate Intelligence Committee nomination hearing on Capitol Hill in Washington on May 5, 2020. (Andrew Harnik-Pool/Getty Images)
Politics

Former Congressman Ratcliffe Sworn In as Director of National Intelligence

John Ratcliffe was sworn in as President Donald Trump’s director of national intelligence on May 26, replacing acting Director Richard Grenell.

Ratcliffe, a Republican who was confirmed by the Senate last week on a 49–44 party-line vote, had served the U.S. House’s 4th Congressional District in Texas before being named to the intelligence position. The Office of the Director of National Intelligence (ODNI) confirmed the swearing-in, which took place in Washington. Grenell swore Ratcliffe in at his new office, according to Fox News.

Ratcliffe is the sixth Senate-confirmed director of national intelligence in U.S. history. The position was created after the Sept. 11, 2001, terror attacks, and the director oversees 17 intelligence agencies, including the CIA and the National Security Agency.

He said being a U.S. attorney was the best job he ever had and loved that it was “an apolitical position.”

“I stood up always to represent the United States of America. Never one party or another. And I very much view that as this role for the DNI,” he said.

“I look forward to treating every member, Republican and Democrat, exactly the same way. And frankly being out of politics.”

Trump originally nominated Ratcliffe for the position last year, but Ratcliffe withdrew his name after fierce opposition from senators, including some Republicans. Lawmakers who previously opposed the nominee threw their support behind him this time around, including Sen. Susan Collins (R-Maine).

Grenell, who served as acting director of national intelligence for three months, had simultaneously served as U.S. ambassador to Germany; he’s also leaving that post.

He earned accolades from some for declassifying information related to an investigation into retired Lt. Gen. Michael Flynn, who in late 2016 was then-President-elect Trump’s incoming national security adviser. Some senators are pushing for additional declassifications, including any unmasking applications made by Obama administration officials from January 2016 through January 2017.

The Department of Justice recently moved to dismiss the case against Flynn, who pleaded guilty to making false statements to the FBI but in recent months said he wanted to withdraw the plea.

Justice Department officials said the interview of Flynn by FBI agents in early January 2017 wasn’t part of a legitimate investigation, citing how FBI officials were prepared to close the probe into Flynn, before Peter Strzok, a high-level FBI agent, rushed to keep it open before going to interrogate Flynn with another agent.