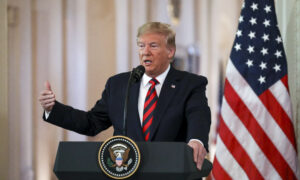 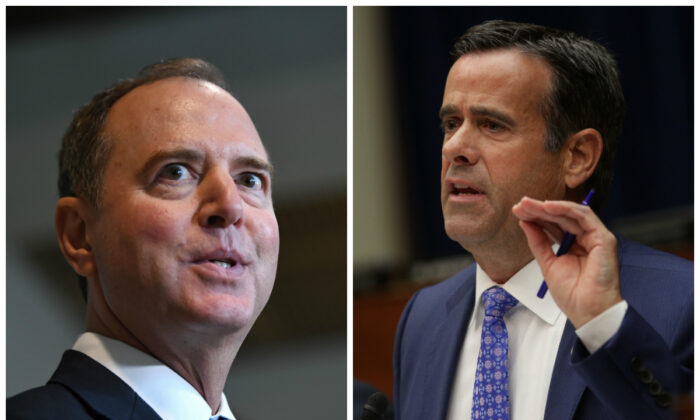 (L)-House Intelligence Chair Adam Schiff (D-Calif.) speaks to reporters after stepping out of a meeting with former special representative to Ukraine Kurt Volker at the US Capitol in Washington on Oct. 3, 2019. (Photo by Saul LOEB / AFP)(R)-Rep. John Ratcliffe (R-Texas) speaks during testimony by Acting Director of National Intelligence Joseph Maguire before the House Select Committee on Intelligence in the Rayburn House Office Building on Capitol Hill in Washington in a Sept. 2019 file photograph. (Alex Wong/Getty Images)
Politics

Ratcliffe: Schiff Should Be ‘Disqualified’ From Running Impeachment Investigation

Rep. John Ratcliffe (R-Texas) said that Rep. Adam Schiff (D-Calif.) should be “disqualified” from running the impeachment inquiry because Schiff’s committee had contact with the alleged whistleblower who filed a complaint against President Donald Trump before the complaint was made.

“I can tell you one thing that we’ve learned very clearly and that is that the Inspector General of the Intelligence Community can provide no information about the contact between the HPSCI [House Permanent Select Committee on Intelligence] majority and the whistleblower prior to his involvement,” Ratcliffe told reporters after lawmakers met with the inspector general, Matthew Atkinson, on Oct. 4.

“So the only way that we’ll be able to get that information is from the HPSCI majority themselves,” he continued. “They are fact witnesses in the same investigation that they are now running. Nowhere else in the United States of America can you be both a fact witness and the prosecutor or investigation in anything, much less an investigation to remove a president from office.”

“It’s entirely inappropriate and Chairman Schiff should be disqualified from running an investigation where his committee—members or staff—are fact witnesses about contact with the whistleblower and the whistleblower process,” Ratcliffe concluded.

Ratcliffe’s call for Schiff to recuse himself is the latest challenge to the chairman’s authority.

A number of Republican lawmakers have signed a motion to officially censure Schiff after he fabricated parts of the Trump-Ukraine transcript while chairing a committee hearing last week.

Schiff later called what he did “in part, parody.”

It was also revealed this week that Schiff was aware of information from the person who filed the complaint before the complaint was filed, clashing with Schiff’s public statement in mid-September that “we have not spoke directly with the whistleblower.”

Schiff said he regretted that he “wasn’t much more clear.”

Ratcliffe on Friday took to Twitter to add: “Since the ICIG has no evidence whatsoever about the relationship and contacts between the whistleblower and Schiff’s staff, the investigation has to get that information from other fact witnesses. Who also happen to be running the investigation.”

Since the ICIG has no evidence whatsoever about the relationship and contacts between the whistleblower and Schiff’s staff, the investigation has to get that information from other fact witnesses. Who also happen to be running the investigation.

Trump shared that missive, adding: “WOW, this is big stuff!”

Ratcliffe’s call for Schiff to recuse himself came as a report indicated that the person who filed the complaint did not tell the Inspector General of the Intelligence Community, Matthew Atkinson, of their communications with a staff member of Schiff’s House Intelligence Committee.

Atkinson reportedly said he “had no knowledge of it.”