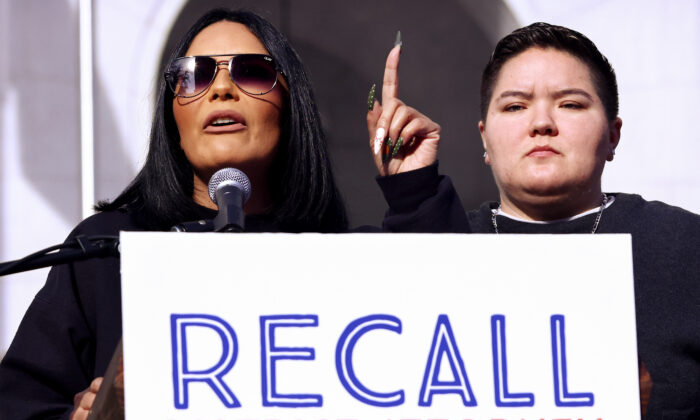 Desiree Andrade (L), whose 20-year-old son Julian Andrade was killed in 2018, speaks at a press conference with supporters of an effort to recall Los Angeles District Attorney George Gascón on Dec. 6, 2021. Opponents of Gascón have launched a new bid to recall the progressive district attorney after an earlier effort fell short. (Photo by Mario Tama/Getty Images)
uncategorized

Often called district attorneys or state attorneys, local chief prosecutors are publicly elected at the county and sometimes the city levels to steer criminal prosecutions on behalf of the people of a particular state. They have wide discretion in setting policies on when to file or drop criminal charges, what kind of criminal charges to file, and how cases travel through the criminal justice system.

In the past decade, an increasing number of elected progressive prosecutors began to use the discretion at their disposal to go softer on certain crimes and decrease the prison population.

Conducted by the National Police Association and Rasmussen Reports, the poll randomly surveyed 982 likely voters in the country by phone or internet on Feb. 7. Of those polled, 67 percent of the survey responders are white and 13 percent are black, while 33 percent are Republican and 35 percent are Democrat.

The margin of sampling error is 3 percentage points, with a 95 percent level of confidence, according to Rasmussen Reports.

Stanford University law professor David Alan Sklansky has been supportive of the progressive trends in the criminal justice system. In 2017, he wrote a journal article, “The Progressive Prosecutor’s Handbook” to guide local progressive prosecutors’ reforms in their local jurisdictions.

But Sklansky also questioned the unchecked discretion of these prosecutors.

“Few public officials have as much power and discretion as prosecutors,” Sklansky wrote in a journal article. “[Prosecutors] have rarely, if ever, questioned the amount of power they exercise, and the absence of meaningful checks—aside from the ballot box—on their discretion.”

Sklansky believes that prosecutors themselves also have an important role to play in determining what kinds of restraints on their power would work best, according to the article. One solution that he proposed was to strengthen defense counsel through more public funding. A stronger defense counsel will help curb prosecutorial misconduct, he wrote.

Manhattan District Attorney Alvin Bragg has directed his prosecutors to stop prosecuting resisting-arrest offenses. Nearly three in five respondents think that makes it more likely for suspects to resist arrest in the future.

In Los Angeles County, Gascón has ordered his staff to stop prosecuting juveniles as adults, regardless of the crime they’re charged with. As a result, a gang member who committed a murder at age 17 was sentenced to six years instead of a possible life sentence.

The survey also asks likely voters if they support new laws to allow more legal tools for victims to seek justice. For example, two in five respondents support new state laws to empower victims to appeal a nonprosecution decision to a judge.