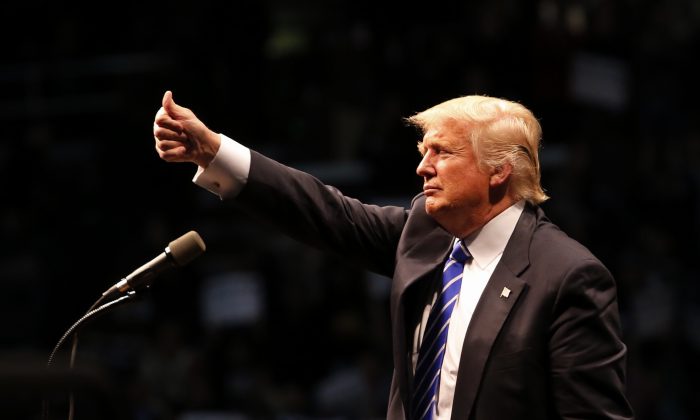 Republican presidential candidate Donald Trump gives a thumbs up to supporters after speaking at a campaign rally on April 11, 2016 in Albany, New York. (Photo by Eduardo Munoz Alvarez/Getty Images)
US

The poll was released on May 19. The nationwide survey of likely voters shows Trump ahead with 42 points, opposed to Clinton’s 37 percent.

About 13 percent of respondents say they favor another candidate and 7 percent say they’re undecided, Rasmussen said.

At the beginning of this month, Trump, the presumptive Republican nominee, posted a statistically insignificant 41% to 39% lead over Clinton who is still expected to win the Democratic presidential nomination. Fifteen percent (15%) favored someone else, and five percent (5%) were undecided.

The RealClearPolitics average of all polls says Clinton has a 3.9-point lead over of Trump—46.2 to 42.3 percent.

In the poll, Trump has 76 percent support among Republicans, and Clinton has 72 percent among Democrats.

A poll from NBC and the Wall Street Journal, released on Sunday, says Clinton is leading Trump by 3 points. In the same poll carried out in April, Clinton held an 11-point lead over Trump—50 percent to 39 percent. Clinton had led him consistently by more than 10 percent since December 2015.

According to the poll, conducted May 15 to May 19:

Looking inside the numbers of her race against Trump, Clinton holds the edge among African Americans (88 percent to 9 percent), Latinos (68 percent to 20 percent), women (51 percent to 38 percent) and those ages 18 to 34 (55 percent to 32 percent).