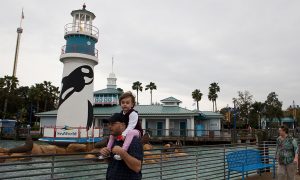 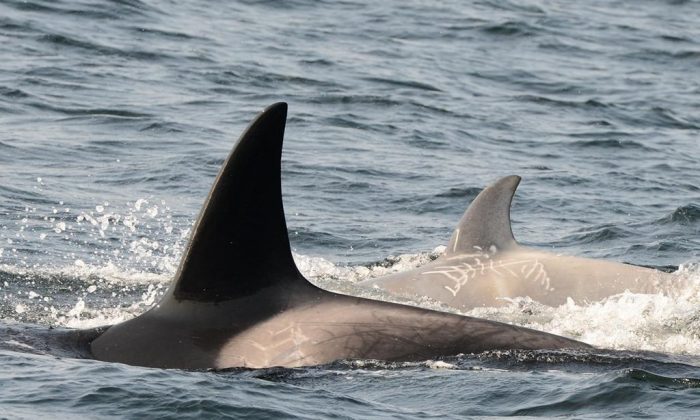 A rare white killer whale, shown in a handout photo, has been spotted off the coast of British Columbia. (HO-Department of Fisheries and Oceans-Miguel Neves Dos Reis/The Canadian Press)
Canada

VANCOUVER—A rare white killer whale has been spotted off the coast of British Columbia.

Jared Towers, an orca ecologist with Fisheries and Oceans Canada, says the young transient killer whale was first seen at the end of November and was spotted again May 17.

Several conditions can give whales that bleached appearance and it’s not yet known which one is affecting this months-old male.

“We don’t actually know what kind of condition it has. There are a few options though,” he said.

If you see a pale Transient (Biggs) #KillerWhale calf in the waters outside of #NanaimoBC, please respect our marine mammal regulations and keep at least 400m away. Our #FisheryOfficers are on patrol. https://t.co/Fr7p6Vtez8 pic.twitter.com/OIyTvs4Tbr

White orcas have been spotted a few times in the last century in B.C.’s waters but none of them are still alive, he said.

Another captured in 1970 was found to have a rare disorder called Chediak-Higashi syndrome. Few individuals with the syndrome, which affects the immune system and causes partial albinism, survive into adulthood, Towers said.

If a white orca does grow to adulthood, it more likely has albinism, a genetic condition where animals have no colouring, or leucism, a partial loss of pigmentation.

“It’s quite common. Lots of different species have it. I mean, it’s rare to see but it’s still well known,” Towers said.

“That’s probably what this little guy has,” he said, referring to leucism, noting that you can still see some pigmentation in the areas that would typically be jet black.

The other option is he could just grow into his natural colouring, Towers said.

“The final explanation is kind of the interesting unknown option. We have documented some kind of whitish killer whales over the last 20 years or so in B.C. as calves, as little guys, but as they grow up they lose this whitish colouring and just turn out to be normal black and white orcas,” he said.

The whale is part of a pod that frequents the waters around British Columbia’s south coast, so if it lives, there should be plenty of chances to keep an eye on it.

“I anticipate we’ll get lots of opportunities to see this whale again and see how its condition progresses. I don’t have any reason to believe it’s in poor health.”