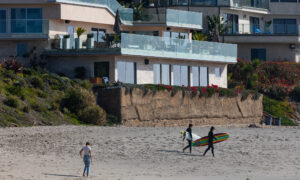 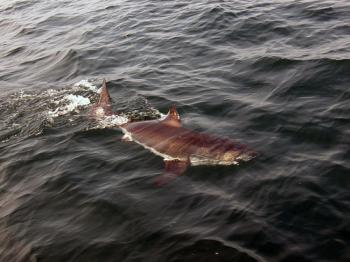 The juvenile great white shark that was caught and released in the Stellwagen Bank, in Boston, MA, on Saturday. (Photo courtesy of Bruce Sweet )
US

By Kristina Skorbach
biggersmaller
Print
At the press conference in the New England Aquarium in Boston, Massachusetts, officials and biologists discussed the appearance of a juvenile white shark that was caught and released on the Stellwagen Bank, Boston this Saturday.

Massachusetts Energy and Environmental Affairs Assistant Press Secretary Catherine Williams said, “White sharks have been off the coast of the bay for decades, it’s not surprising that the white shark has been spotted in the area, because of the growing seal population.”

Gray seal colonies have been protected under the Monomoy Island National Wildlife Refuge located just off the coast of Cape Cod. There has been a steady increase in the population of seals this summer season attracting white sharks, which enjoy feeding on ‘fat and blubbery mammals like seals and sea lions’ explained spokesman for New England Aquarium, Tony LaCasse.

Biologist from the Division of Marine Fisheries (DMF), Greg Skomal, together with the secretary of Energy and Environmental Affairs of Boston talked about the possible shark activity at the Massachusetts coast this summer at the conference.

The great white shark that was caught, tagged and released by the local fishermen was said to be a juvenile of six to seven feet in length and weighting around 150 pounds. Last year in September, Skomal tagged five great whites that were 8 to 15 feet in length with high-tech tags.

These high-tech tags are different from the physical tags in that they act like a GPS satellite and can even be programmed to measure the depth and temperature of the water the shark is in. The juvenile caught on Saturday, however, was tagged only with a conventional plastic tag that can only act as a coordinate once the shark is caught again. Researchers are looking to find migratory patterns of white sharks, which have thus far been studied very little.

“It’s just another data point for biologists” said LaCasse about the Saturday’s finding. For the residents, however the sharks mean nothing new, “We are urging people to use common sense,” said Williams.

This would mean to watch out for areas where a seal colony can be seen in the water, to inform someone when they spot a white shark, stay out of the water during dusk or dawn, and not swim alone.

Records show that there have been no recent fatalities in the Massachusetts area related to shark bites, the oldest incident dating back to 1936. “You are more likely to die of an allergic reaction of a bee sting on the beach than of a shark-related bite,” said LaCasse. He said that two people died last year on the beach after a sand castle structure they were trying to build collapsed on them, while there has been no shark-related fatalities for almost 75 years.

“It’s very easy to manage people when sharks are around,” added LaCasse.

The business owners in the area also told the Aquarium staff member that their profits are generally higher during shark season because everyone wants to come and see the sharks.

LaCasse said that people are usually fascinated with the top predator like the great white shark because it is the largest carnivorous predator that dominates a habitat that is not natural to humans—the water. “White sharks are most popular because of Hollywood,” said Williams.