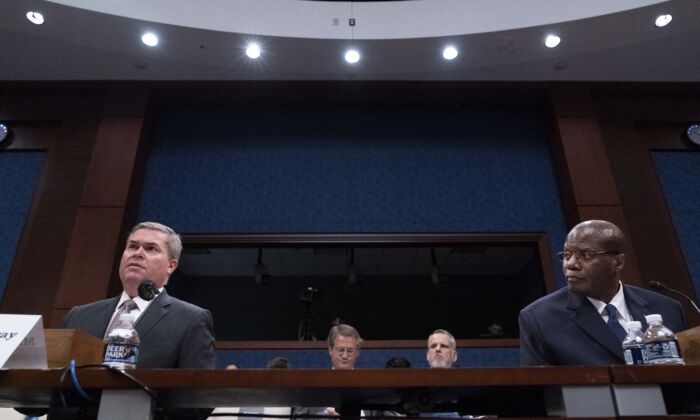 Defence Under Secretary for Intelligence and Security Ronald Moultrie (R) and Deputy Director of Naval Intelligence Scott Bray (L), testify before the Counterterrorism, Counterintelligence, and Counterproliferation Subcommittee, during a hearing on Unidentified Aerial Phenomena on Capitol Hill in Washington on May 17, 2022. (Jose Luis Magana/AFP via Getty Images)
Congress

“We just got hosed, basically,” Burchett told reporters on May 17, saying that he thinks officials are withholding information from Americans on UFOs, also known as Unidentified Aerial Phenomena (UAPs) in official jargon.

The remarks came after the first open UFO hearing since 1969. Sightings of unexplained lights by aviators have occurred since the early days of flight yet the topic hasn’t had a mainstream discussion in the past half-century until this week.

Earlier on Tuesday, a House Intelligence subcommittee heard testimony from the Pentagon, including its top intelligence official Ronald Moultrie and the deputy director of Naval Intelligence, Scott Bray, who also showed lawmakers two videos of UAPs.

“[The video they showed] was the best he had … For them to show that lame video when you can find all this other that’s out there,” said Burchett, who is not on the subcommittee but attended the meeting.

When asked about a white-ish reflective spherical object flying past a U.S. Navy aircraft, shot in 2021 by military personnel and presented at the Tuesday hearing, Bray said he did “not have an explanation” for that specific object.

Being a long-term advocate for increased transparency on UFO information, Burchett said the public deserves to hear from pilots who have seen such sightings firsthand.

“We should have heard from people who could talk about things they’d personally seen, but instead, the witnesses were government officials with limited knowledge who couldn’t give real answers to serious questions,” the Tennessee Republican wrote on Twitter the same day, calling the May 17 hearing “a total joke.”

The Epoch Times has reached out to the subcommittee’s representatives for comment on Burchett’s remarks.

Chaired by Rep. André Carson (D-Ind.), the hearing also followed up on last year’s key government report on UAPs, in which officials reviewed 144 incidents dating back to 2004, including 18 incidents in which spotters “reported unusual UAP movement patterns or flight characteristics.” Meanwhile, the sightings recorded by the military include 11 “near-misses” with U.S. aircraft.

Moultrie, the under secretary of defense for intelligence and security, said most UAPs “can likely be isolated, characterized, identified and, if necessary, mitigated.”

Yet the Pentagon failed to explain a number of events, Bray told lawmakers.

“There are a small handful [of events] in which there are flight characteristics or signature management that we can’t explain with the data we have,” he said. “Those are obviously the ones that are of most interest to us.”

The public hearing was followed by a private session of the committee when lawmakers could hear classified information.

Yet Burchett dismissed speculation that unexplained sightings tie to a foreign power.

“Look at [Russian President Vladimir] Putin, that ego he’s got. I mean he would land a UFO on the White House lawn, get out bare-chested, probably ride a unicorn out and wrestle Biden then get back in it and fly back to Russia,” he said.

“And I don’t believe it’s the Chinese either. Because if they did they would control us.”