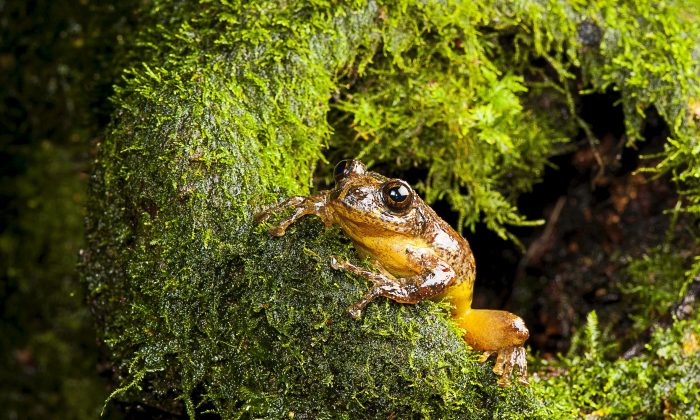 This 2010 photo provided by biologist S.D. Biju shows a Frankixalus jerdonii, belonging to a newly found genus of frogs, seated in the wild. The frogs live high in the forest canopies of northeastern Indian jungles. (SD Biju via AP) MANDATORY CREDIT
Science

A curious tree frog that breeds in the hollows of trees and feeds its young its own unfertilized eggs was rediscovered in Southeast Asia—nearly 150 years later.

The specimen, Jerdon’s tree frog, was last seen in 1870, according to National Geographic, but it was found alive in the forests of northeastern India. The frog lives in holes in trees and bamboo as high as 20 feet, making it difficult to spot.

The 20-inch-long species with a body the size of a golf ball was found first by British zoologist Thomas Jerdon, and it was later named after him, as Polypedates jerdonii. But National Geographic, citing the scientist who found the frog, noted its part of a completely new genus, Frankixalus jerdonii.

The female frogs attach their eggs to the insides of tree hollows, which also hold pools of water. When the tadpoles hatch, they fall into the water, and females then feed the tadpoles their unfertilized eggs. Most tadpoles of other frog species eat plant material. And adult Jerdon’s tree frogs tend to eat plant material rather than insects or larvae, reported the BBC.

The discovery was made by famed Indian biologist Sathyabhama Das Biju, “The Frog Man in India,” has found 89 of the India’s 350 frog species.

Biju and his team hope the frogs could be found across a wider area, from Thailand to China.

“We heard a full musical orchestra coming from the tree tops. It was magical. Of course we had to investigate,” Biju told the BBC, describing the finding.

“This is an exciting find, but it doesn’t mean the frogs are safe,” Biju added, adding that he hopes the discovery leads to more awareness of the dangers of unfettered development to the animals.

Some of the forest areas where Biju’s team collected frogs in 2007 and 2008 were already slashed and burned by 2014 for agricultural development. The region’s tropical forests are quickly disappearing because of programs to cut trees, plant rice, expand human settlements and build roads.