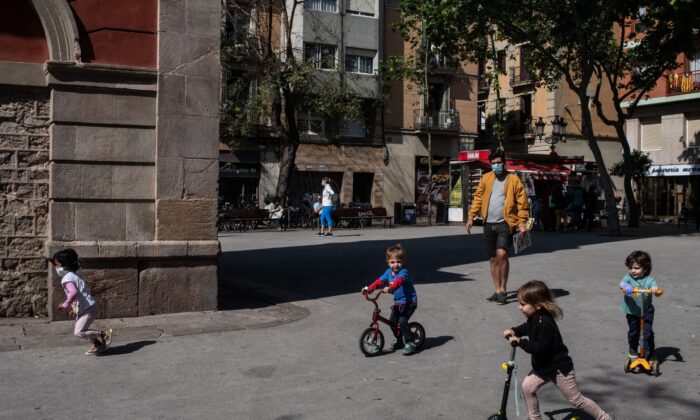 Doctors in the UK were warned to look out for a rare but dangerous reaction in children linked to the CCP virus.

The National Health Service (NHS) sent out an alert to doctors in north London that it “has been reported that over the last three weeks there has been an apparent rise in the number of children of all ages presenting with a multi-system inflammatory state requiring intensive care across London and also in other regions of the UK.”

“The cases have in common overlapping feature of toxic shock syndrome and atypical Kawasaki disease with blood parameters consistent with severe COVID-19 in children,” the alert continued.

Elaborating further, officials said that the virus has produced an “inflammatory syndrome” for UK children. Or, officials added, “there may be another, as yet unidentified, infectious pathogen associated with these cases.”

According to the Guardian, a similar version of the alert was also distributed by the Pediatric Intensive Care Society to specialist doctors working in UK hospitals’ intensive care units.

Sars-CoV-2 is another name for the CCP (Chinese Communist Party) virus, a novel coronavirus that causes the COVID-19 disease. Typically, symptoms include respiratory problems, a cough, a fever, or in more severe cases, pneumonia or even death.

Experts told the BBC that very few children become severely ill with the CCP virus, and evidence gathered from around the world suggests they are the least-affected group while elderly people and individuals with underlying health problems are the worst impacted.

Dr. Nazima Pathan, a consultant in Paediatric Intensive Care in Cambridge, told the broadcaster that health officials in Spain and Italy have reported similar cases among children.

“Some of the children have presented with a septic shock type illness and rashes – the kind of presentation we would expect to see in toxic shock syndrome and Kawasaki disease (which affects blood vessels and the heart),” the news outlet quoted Pathan as saying. “Overall, children seem to be more resilient to serious lung infection following exposure to coronavirus, and the numbers admitted to intensive care units are relatively low.”

The findings come as UK Prime Minister Boris Johnson, who has been recovering from a case of COVID-19, has faced mounting pressure to reopen the country’s schools amid a lockdown.

“We are certainly aware of the reports, and the Department of Health are looking at that,” a spokesperson for Johnson told news outlets on Monday.