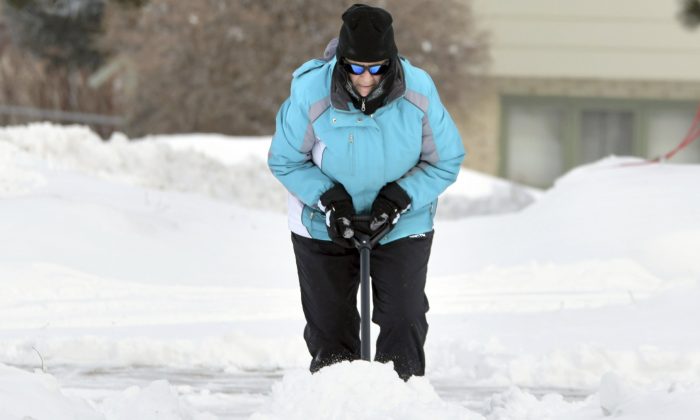 Florence Leingang clears the sidewalk of snow in front of her home in Mandan, N.D., on Feb. 4, 2019. (Mike McCleary/The Bismarck Tribune via AP)
US News

SEATTLE—Winter weather pounded a swath of the U.S. West on Monday, Feb. 4, closing schools, delaying flights and turning streets into sledding hills in coastal cities like Seattle that rarely get much snow.

Parts of California and Montana braced for the threat of mudslides and avalanches this week, while the Midwest warmed up from a dangerous blast of cold last week that is linked to at least 30 deaths in several states.

Some areas north and east of Seattle got 8 to 10 inches of snow. Temperatures were expected to be 15 degrees below normal this week, with lows in the teens, the National Weather Service said.

More than 200 flights at Seattle-Tacoma International Airport were canceled and over 450 delayed.

Chris Allahyar of Edgewood, Washington, told Seattle news station KOMO-TV that he was trying to make a flight but his car got stuck on an icy road.

“Everything was fine until I got off the freeway and everything turned to ice. Couldn’t even make it off the road. I’m just stuck right now,” Allahyar said. “I really underestimated the temperature.”

Communities on the northern Oregon coast got several inches of unusual snow, and it was falling steadily in Portland, Oregon. A cold spell in Portland was expected to last for about 10 days, with overnight temperatures dipping well below freezing and more snow later in the week.

The storm system lingering over the Northwest has sent waves of snow into the Northern Rocky Mountains, where it mixed with a blast of frigid arctic air and gusting winds to create hazardous driving conditions and dangerous wind chills 40 degrees below zero and lower.

“We’re kind of stuck in a cold pattern,” Moldan said.

The weather was warmer near Yellowstone National Park, but the fresh snow that fell on the weak snowpack in the mountains near the park led to avalanche warnings.

Snow and rain throughout California has threatened flash flooding where massive wildfires roared through communities last year and dangerous driving conditions in the latest of a series of storms over the past few days.

A flash flood warning is in place for #WoolseyFire burn areas through 12:15 p.m. Mudslides and debris flow are expected, per @NWSLosAngeles. Stay safe out there! #LARain pic.twitter.com/hKfSnooA3f

Officials lifted flash flood warnings Monday but warned that another storm Tuesday could bring danger of mudslides and flooding in the Malibu area, where a wildfire destroyed homes and burned hillsides bare, and southeast of Los Angeles, where an August blaze scorched a huge area in the Cleveland National Forest.

The weather service issued a winter storm warning for the Los Angeles and Ventura County mountains through Wednesday, with more than a foot of snow expected at higher elevations.

A storm that swept across California and Nevada dumped as much as 8 feet of snow over the weekend, with much more expected.

In parts of California’s Sierra Nevada, officials issued blizzard and avalanche warnings through Monday night, warning that cold conditions in the northern mountain range could become life-threatening as a series of intense storms and powerful winds brought whiteout conditions that closed some mountain roads.

Electric-powered commuter trains in the Chicago area were getting back to normal with temperatures in the 40s. The arctic cold played havoc with overhead power lines and forced the shutdown of two major train lines.

But cold weather again moved into Michigan’s Upper Peninsula, where an ice storm created hazardous travel conditions and led schools and businesses to close. Icy conditions were expected Tuesday night and Wednesday in the Lower Peninsula, including the Detroit area.