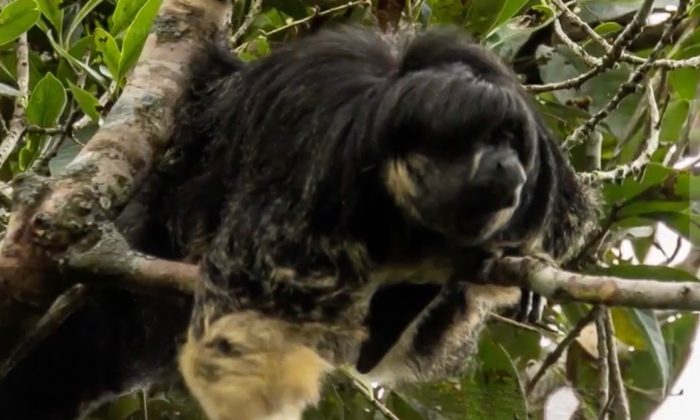 Researchers traveled to the depths of the Amazon and found a monkey species that hadn’t been seen in 80 years.

Saki monkey expert Laura Marsh was looking for anything that could lead her to the rare Vanzolini saki. She has been studying saki monkeys for 10 years. In 2014, she already identified five new species of saki, but the Vanzolini remained elusive.

Marsh and an international team of primatologists, photographers, drone operators, conservationists, and local guides set out to find the Vanzolini bald-faced saki. They set out in a small, two-story houseboat on the Eiru River, close to the border between Brazil and Peru, as National Geographic reported.

The team’s main mission was to find the monkey, but it was also there to research the biodiversity of that little-explored region of the Amazon. They planned to spend four months there.

Marsh first spotted the monkey after only four days into her trip, she cried. “It was fantastic,” she said to National Geographic. “I was trembling and so excited I could barely take a picture.”

Vanzolini sakis were first seen in 1936 by Ecuadorian naturalist Alfonso Ollala. That was also the last sighting of the monkeys alive. Vanzolini saki monkeys are unique in that their long, bushy tails are not prehensile like other monkeys. Their arms and legs are covered in gold fur. They use their hands and feet to get around on trees in a way that resembles cats. Although the monkey has a unique appearance, scientist still need to determine its genetic peculiarities, now that it has again been seen.

Marsh will eventually determine the proper label for the monkey’s population status for the International Union for the Conservation of Nature. According to National Geographic she will likely choose “threatened,” but must first analyze how actively the species is hunted.

Large primates are eaten by locals. Their rainforest habitat often falls to development, agriculture, or cattle ranching. “If it just stayed at this level of impact right now,” Marsh said, in a Mongabay article, “it’s not ideal for the conservation of Vanzolini populations, but at the end of the day it’s not killing the entire species because humans simply can’t get at them all.”

Marsh observed that hunting, even in this wild, remote region, is a big issue.

“I have never seen people constantly with guns,” Marsh said. “Fishing and hunting in every little corner. Large birds were rare. Forest birds were gone … All of the Amazon is not homogeneous. Our little corner has special animals and new species.”

The Amazon is a high priority for conservationists, since it contains 10 percent of the world’s biodiversity. But as the population shifts and Amazonian cities grow, protecting the region becomes more challenging. Logging restrictions are also difficult to enforce.