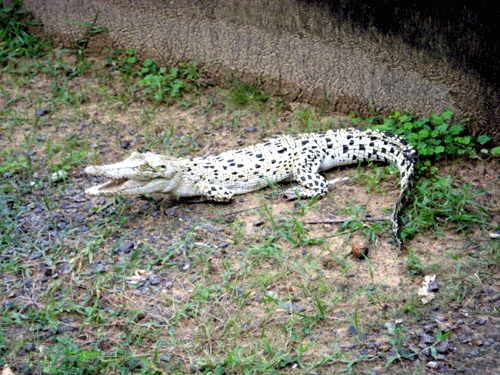 Tourists were fortunate enough to get a glimpse of a mature white crocodile nicknamed Pearl during a cruise in northern Australia on Nov. 19.

Pearl was spotted in Adelaide River, Northern Territory, by staff and tourists who were on the Spectacular Jumping Crocodile Cruise, reported NT News.

NT Crocodile Conservation & Protection Society has speculated on a Facebook post that the reptile is the offspring of Michael Jackson – another rare crocodile with a black body and white head. Michael Jackson was killed after taking the life of fisherman Lanh Van Tran in 2014.

Michael Jackson and Pearl’s appearance is caused by hypomelanism, a condition where a reduced amount of the pigment melanin is produced compared to other animals of the same species seen in the wild, according to BBC citing a zoologist.

“During incubation, if the eggs in the nest get a little bit too hot, it can lead to errors in cell division and cause mutations,” Britton told BBC.

He added that the condition could cause “a color mutation or a different pattern of scales on the skin”.

Britton also said that white crocodiles are “not uncommon” among young crocodiles, particularly ones bred in crocodile farms.

“It’s a little bit more unusual to see an adult crocodile with that lighter coloration,” Britton told the news station.

“I’ve seen crocodiles like this every now and then, but not as big in the wild,” he added.