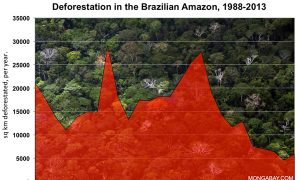 It’s an almost unheard-of encounter – caught on video. A group of “uncontacted” indigenous people came out of the Brazilian-Peruvian forest along the Amazon river and entering a nearby modern community.

That video shows a translator communicating with the young men and giving bananas as gifts.

It’s estimated about 77 isolated tribes willingly live in deep within the Brazilian Amazon – the most in the world, according to Survival International. These indigenous are typically very healthy – never having been exposed to modern day ailments. They live off the land – hunting and picking fruit.

And the tribes and supporting organizations take special steps to keep it that way. So, what brought this rare meeting? According to a translator, it was an effort to gain safety from drug traffickers and illegal loggers.

The tribe described an attack during the exchange, according to LiveScience.

“The majority of old people were massacred by non-Indians in Peru, who shot at them with firearms and set fire to the houses of the uncontacted,” LiveScience reported. “They say that many old people died, and that they buried three people in one grave. They say that so many people died that they couldn’tbury them all and their corpses were eaten by vultures.”

Researchers suspect the main reason for the encounter was to find weapons and allies to help to fight off modern day people who they’re surely outgunned by. And unfortunately, as the Telegraph explains, violent attacks are just one of many worrisome issues facing the indigenous. Because they have never been exposed there immune systems aren’t equipped to deal with what the modern world would think of as common illness.

So, if one person catches such an illness then goes home to their tribe, not only can that person die but the spreading illness could kill off the entire tribe.

“This is extremely worrying and it seems that neither government is fully prepared for this type of contact. … Much more needs to be done to train people … because I think it’s going to happen more and more.”

However, in a report released by the Inter-American Commission on Human Rights the group made recommendations to help indigenous people keep their desired isolation.

Some of those recommendations include implementing a health protocol to deal with infected peoples and creating legislation that would keep indigenous territories and its resources unharmed.

There’s been no word on what actions the Peruvian government might take, but Brazil has reportedly flown in emergency medical aid. Shortly after the video was taken, the indigenous people retreated back into the forest.