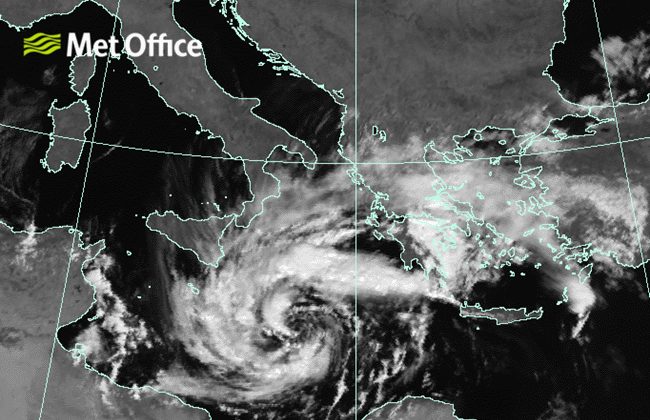 Europe is usually safe from hurricanes, far from the tropical waters that whip them up before firing the cyclonic storms into the U.S. East Coast at this time of year.

But a rare weather system, a so-called medicane—a combination of the words Mediterranean and hurricane—formed over the Mediterranean last week, killing five people in flash floods in Tunisia, before tearing into the Greek islands.

Local media reported that the Greek island of Peloponnese was slammed by hurricane-force winds (over 73 miles per hour) on Sept. 29, before the storm weakened and headed toward Bulgaria. Turkey was braced for the slow-moving storm to hit Oct. 1.

Europe’s experience with hurricanes is usually limited to the odd storm that turns hard right into the Atlantic, loses shape, spin, and scatters its feeble remnants on the British Isles, and the Mediterranean is too cold and small to regularly cook up the kind of system that’s spawned by the hot waters of the tropics in the Pacific and Atlantic oceans.

Sea temperatures are unusually high for the time of year, reaching as high as 28 degrees Celsius (82 degrees Fahrenheit), pumping more moisture into the system and fueling thunderstorms and potential tornados.

While medicanes aren’t assigned official names, this storm has been nicknamed “Zorba.”

European weather services predicted that the storm could dump more than a foot of water in a day and a half.

Julian Heming, a tropical cyclone expert at the British Met Office weather service, said the storm was formed by a clash of cold air pushing south over the Balkans and warm air moving north from Africa.

“However, as it has strengthened over the warm waters of the Mediterranean Sea, it is starting to acquire some characteristics of a tropical cyclone,” Heming said.

“Bands of thunderstorms are starting to wrap around the low pressure center, although are not yet concentrated close to the center, as you might see in a fully ‘tropical’ cyclone,” he said in a statement.

The Met office describes medicanes as unusual, but not rare. However, a paper in a meteorological journal in 2011 noted that “Medicanes are considered rare phenomena, since only a few have been directly observed.”

Medicanes can reach a similar strength to a Category 1 hurricane.

Three-quarters of Greece was put on alert with warnings of flooding and schools in the Greek capital and several other parts of the country closed for the day before the storm hit.

Boats were flipped over and dumped on the beach at the seaside town of Methoni, famous for its Venetian castle, according to local media.

A few hundred miles away from the eye of the storm, in the Sicilian town of Stazzo, massive waves swamped sea defenses as people struggled to secure their boats in the harbor.

After scraping past Turkey and Bulgaria, the weakened storm system is expected to head into the Black Sea and then on into Russia’s Volga region and possibly Ukraine.

The storm is the second natural disaster to hit Greece in recent months. In July, at least 80 people were killed in the worst forest fire in a decade.