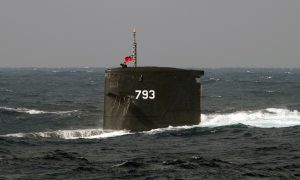 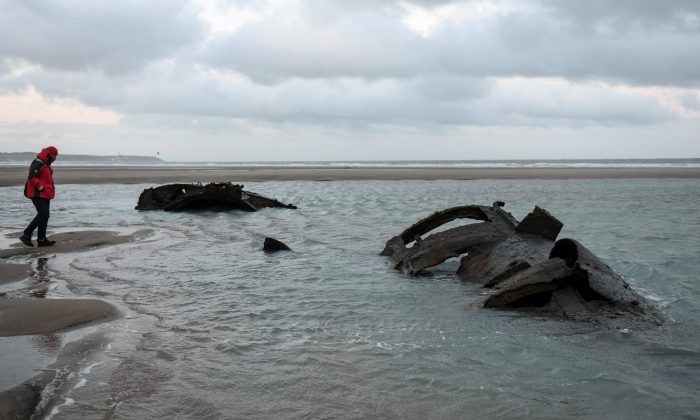 A man looks at the wreckage of a German submarine that ran aground off the coast of the city of Wissant in July 1917 and has recently resurfaced due to sand movements on the beach of Wissant, near Calais, northern France, on Jan. 9, 2019. (Denis Chalet/AFP/Getty Images)
Europe

A German World War l submarine has surfaced over 100 years after it ran aground on a beach in France, exposed by tides, shifting sands, and winter storms.

The 600 ton U-61 was heading out to lay mines in when it ran aground in heavy fog near Calais, where the crew scuttled it, in July 1917.

After sinking out of sight in 1932, the rusting carcass of the rare 150 foot U-boat reappeared two weeks ago on the beach at Wissant, which looks out over the 20-mile wide channel to the English coast.

Wrecks like the one that has appeared on the French beach are rare.

Local newspaper La Voix Nord described the submarine as a “ghost” that appears only briefly every few years as the tides and winds shift the sands the right way.

This winter, two chunks of the wreckage have emerged about 500 feet from the edge of the beach.

Caught by the Cavalry

“It is one of the 64 submarines (UC 16 to UC 79) put into service during World War II and responsible for the loss of 353 ships,” said Vincent Schmitt, a local tour guide who stumbled on the wreck, and whose Facebook photographs stirred great interest.

Before it ran aground near Calais, the U-61 spent just six months at sea, during which it was responsible for sinking 11 allied ships, according to Uboat.net

“The wreck is visible briefly every two to three years, depending on the tides and the wind that leads to sand movements, but a good gust of wind and the wreck will disappear again,” the local mayor told the BBC.

“In recent days, we had high tides and southwesterly winds, which tend to migrate sand to the north, ” he said.

The exact course of events around the sinking of the submarine is not clear. Some reports said that the ship was blown up by the allies to detonate the mines, others reports suggest the ship’s crew of 26 exploded the ship.

Reports agree that the ship was scuttled by the crew, who were later taken captive by a regiment of Belgian cavalry.

A navy patrol spotted a dark mass in heavy fog at 4 a.m in the morning on July 26, 1917, according to La Voix Nord. As their boat approached, they saw a 150-foot submarine on the beach, its hull already torn open by an explosion, as its crew tried to unload ammunition into the sea.

The boat returned to shore, where the officers alerted a Belgian cavalry regiment, according to La Voix that intercepted the crew as they abandoned their submarine.

The submarine would have once weighed 600 tons and was powered by two diesel and 2 electric engines, according to Schmitt, who said the ship ran aground when the captain sailed too close to the sandbars as he tried to avoid the antisubmarine nets out in the open seas.

Class UC II submarines were coastal minelayers, according to U.boat.net, able to carry up to 18 mines and traveling at a speed of 11.6 knots on the surface, and 7 knots submerged.

They had a range of 9,430 miles, but could travel only 55 miles at a time when submerged, and could dive to a depth of around 150 feet.