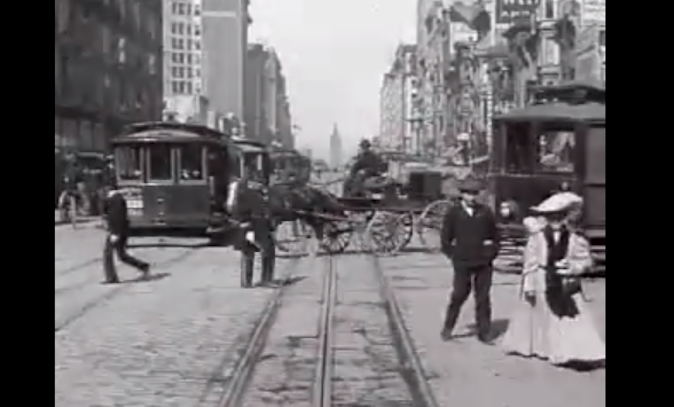 Rare Footage of San Francisco Days Before the 1906 Earthquake (Video)

Just days before the great San Francisco earthquake and fire on April 18, 1906—which devastated 500 city blocks and left half the city homeless—cinematographer William Harbeck mounted his camera on a San Francisco cable car and filmed a trip down Market Street. The footage captures everyday life in the city—life that was about to change. There’s a mix of motorcars, horse-drawn buggies, cable cars, bicycles, and plenty of pedestrians, including a dare devil playing chicken with the cable car. It’s clear there was no concept of jaywalking.

Fortunately, Harbeck had shipped the film off to New York for processing, which is quite possibly what saved it from the quake. Harbeck soon made a name for himself shooting footage in the aftermath of the disaster.

Six years later, Harbeck was due to arrive in New York after some business in Europe. He was traveling via cruise ship and the plan was to take him off early to film the vessel’s arrival in New York. The ship was the Titanic. Harbeck was 44.

Courtesy of the Prelinger Archives. (sanfranciscofilmmuseum.org)