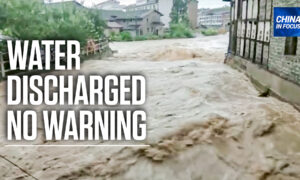 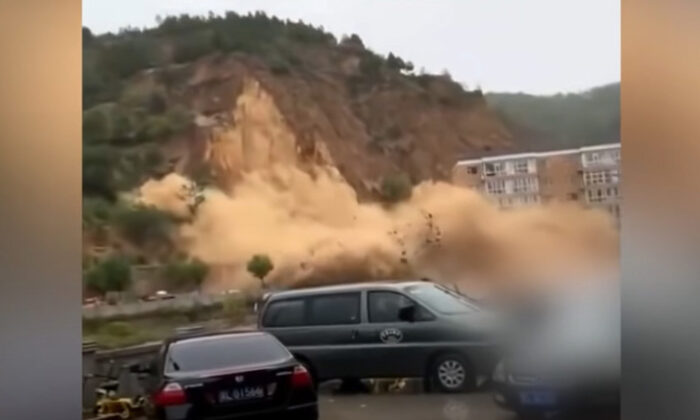 Since Oct. 2, China’s largest coal-producing province, Shanxi, has experienced continuous heavy rain, affecting more than 70 districts and cities in the province. The unceasing downpour has resulted in floods, landslides, road closures, and the suspension of 60 of its coal mines.

The Fenhe river flows through the center of Shanxi Province; it is the second-largest tributary of the Yellow River, with a total length of about 441 miles. According to Sina News, a Chinese state-owned media, the lower reaches of the Fenhe river suffered the largest flood in 57 years.

At around 7:40 a.m. on Oct. 9, the Hejin section of Fenhe river in Hejin city, southwestern Shanxi, has faced its largest flood since 1964. Its downstream flow had reached 985 cubic meters (34,700 cubic feet) per second. On the afternoon of Oct. 9, the flood passed the bank, cracking a gap in the dam. Local authorities diverted the water to a local village covering almost 6,700 hectares (16,500 acres).

According to China Daily, a Chinese state-owned media, 1.75 million people in 76 counties in Shanxi have been affected by the floods, with more than 120,000 having been evacuated. The flooding across Shanxi province has caused 17,000 homes to collapse and damaged 190,000 hectares of farmland.

The China Meteorological Administration noted that the heavy precipitation, accumulated rainfall, its long and often heavy duration accompanied by thunder and lightning storms had hampered rescue efforts in Shanxi.

The Shanxi Provincial Emergency Management Department, on Oct. 6, initiated a level three emergency response for geological disasters such as collapses and landslides that occurred in Jinzhong City, Luliang City, and Linfen City of Shanxi Province.

China has a four-tier flood control emergency response, with level one being the most severe.

According to the state-run Global Times, a landslide occurred in Jingpo Village, Pu County, Linfen City, Shanxi Province on Oct. 5. Four police officers died as a result, and one was injured, said the authorities. The landslide had caused traffic on the local expressway to be blocked.

On Oct. 8, Shanxi’s Emergency Management Department reported that 18 of the 117 counties in the province had precipitation exceeding 200 mm (7.87 inches), and three districts broke their precipitation record. From Oct. 2 to 7, Shanxi has shut down 60 coal mines and 372 non-coal mines.

According to China’s National Bureau of Statistics, Shanxi Province produced 1.063 billion tons of raw coal last year. The production capacity report released by the Shanxi Energy Bureau in September showed 682 coal mines in the province, including the 60 that were suspended.

According to the state-run China News, on Sept. 29, Shanxi Province and 14 provinces signed coal supply contracts for the fourth quarter, involving Shanxi to supply 55 million tons of coal to those provinces. However, with the further coal shortage due to the floods, China’s ongoing power crisis has been exacerbated.