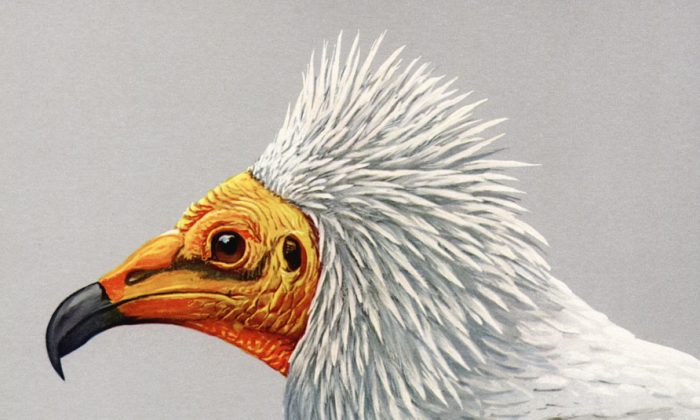 Prompt action by volunteers of an NGO following a tip-off about a rare Egyptian Vulture being held in captivity led to its rescue and subsequent release into the wild. The incident happened in the Darend area of Ganderbal district of Jammu and Kashmir. Egyptian Vultures are classified as Endangered.

A team of volunteers of Wildlife SOS led by Tahir Gazanfar reached the village after they were tipped about a family probably holding the rare bird captive in their home. The inhabitants of the house admitted that the bird was on the second floor in a store room with an access through a steep wooden ladder. The volunteers climbed up the ladder and after a long-drawn-out struggle in the dark, managed to rescue the vulture. The bird was found to be injured and scared after its stressful experience.

The rescue operation by the team was delayed by the villagers though who seemed to have captured and tortured the bird. The team noticed how an injury on its back had turned septic.

After initial first-aid, the bird was kept under observation for a night. The traumatic experience had left it weak, frightened and it refused to eat. A thorough examination and x-rays by a vet the following morning proved luckily that the injuries were not fatal and as the wings were not broken, the bird could fly after rest and recuperation.

After spending a week of rehabilitation in an enclosure at Dachigam, where the bird was given proper medicines and care, the Egyptian Vulture was released in a safe place.

Egyptian vulture (Neophron percnopterus) smallest among all vultures, is classified as endangered on the IUCN Red List. Adults have largely white to pale grey plumage, in contrast with the black flight-feathers and the bold yellow bare skin on the face. They have a long, narrow bill that has a yellow base and terminates with a black tip. Their tail is short and wedge-shaped. The legs may be grayish-white, pink or pale yellow.

Vultures of the Indian subcontinent are battling their greatest war ever due to the avid use of an anti-inflammatory drug called Diclofenac. This pain killer is often given to cattle and livestock and when the vultures eat the drugged carrion, they die. Although the drug use has been banned and it has helped save the scavenger birds, they are still a threatened lot.

This particular bird was lucky to have been saved from the ignorant villagers, but the incident shows how many in India are still not aware of the survival challenges of such species. It is not just the iconic species like tiger and elephants that need saving, but also the smaller, lesser known ones, that sometime become victim of ignorance.