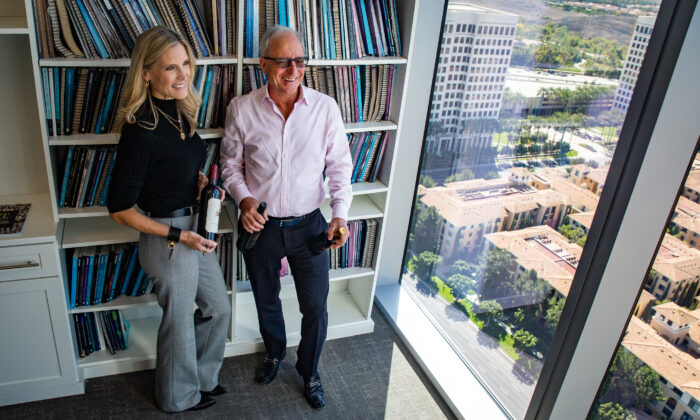 Steve Contursi became enamored with collecting coins when he was around 5 years old, and as a young teenager, he began buying and selling rare coins for a profit.

It was the adventure of searching for these unique coins, dating back to the founding of the United States, that piqued his interest.

Now, more than five decades later, Contursi, with the help of his wife Seanne Contursi, has built the successful Rare Coin Wholesalers, which helps other collectors and investors find and acquire rare coins worth millions, as well as sell coins from their own collection.

What he did as a teenager hasn’t changed that drastically compared to today—however, the deals Contursi does now are worth a lot more.

In 2005, Contursi, who serves as the CEO of Rare Coin Wholesalers, made history at the time for the single biggest coin collection purchase—the King of Siam set, which went for $8.5 million. He made similar headlines in 2011 when a coin he sold, the 1787 Brasher Doubloon, was subsequently purchased by a Wall Street firm for $7.4 million.

The most prized possession of his collection,  before he sold it, was the first silver dollar struck by the U.S. in 1794, which at the time was the most expensive coin ever in the world, coming in at $10 million. Its historical value is unmatched, as it was forged in the attic of a colonial home before the U.S. Mint was even founded. Before its creation, America had been using coinage from other countries.

Producing this coin proved to the world the sovereignty of the United States.

Rare Coin Wholesalers and its parent company S.L. Contursi Inc., which also handles their Arrow and Branch winery and boutique store in Laguna Beach, are both family-run. With the exception of about a dozen support staff, the businesses are managed either by Contursi’s eldest son, Michael, Seanne, or Contursi himself. The family dynamic has served the company well, Michael says.

“You have ownership. You have skin in the game. No matter what, you care greatly about its success,” said Michael, 41, who has been part of Rare Coin Wholesalers since 2006.

Seanne manages Arrow and Branch, a name that references the eagle on all U.S. coins, which grasps an olive branch in one hand and a handful of arrows in the other. It represents America’s idea of peace but preparedness for war. Michael is the president of Rare Coin Wholesalers.

Contursi’s daughter, Alexandra, 32, has recently taken on a larger role in the company, working on expanding the Arrow and Branch name and representing the family when talking to prospective clients, both in the coin and wine industry.

His youngest daughter, Nicolette, 25, who has lived in Paris for five years, helps source products for the Laguna Beach storefront. The two sisters started a jewelry line called Chat Noir, which is also displayed in the store.

“It’s really what my vision was,” Seanne said. “Not just giving back to the community and presenting something that I thought was maybe lacking or would be appreciated, but doing that with my daughters, in turn, is fun.”

Contursi’s two other children, who aren’t as intimately involved in the company, are Steven, 28, and Carly, 40.

Seanne and Contursi reside in Laguna Beach, where they’ve lived since their marriage in 1988, for about 70 percent of the time and visit their home in Napa about twice per month.

In the S.L. Contursi conference room, hundreds of catalogs of coin auctions over the years flank two bottles of Arrow and Branch cabernet francs. It’s illustrative of his deep experience in the business. That plus patience in the market has catapulted Contursi’s company to one of the biggest names in the numismatic industry.

“Most of the time, I buy the coins, not even knowing where I’m going to sell them. And they all sell eventually,” Contursi said. “So that’s always been our philosophy.”

Contursi’s passion for coin collecting started at a young age, and so did his exposure to running a rare-coin shop. While attending graduate school for physics at the University of Minnesota in Minneapolis, he was offered a nighttime shift at the coin section of a small jewelry kiosk in a mall.

The owner of that shop eventually offered to sell Contursi the business so he could start a findings company, which supplies items used in the jewelry-making process, such as chains and hoops. His mother loaned him what he says was essentially her life savings at the time, $10,000, to buy the company, and his former boss loaned him $2,500. Contursi said he paid them both off within a year, and “the rest is history,” he added.

In 1978, Contursi became a partner and executive vice president at Northwest Territories Gold and Silver exchange, since they needed an expert numismatist to assist with their expansion into rare coins. Then, he partnered with a leading silver dollar expert, Wayne Miller, to start Miller-Contursi Inc. in 1981.

Before starting S.L. Contursi in 1991 with Seanne, who also has a background in the coin industry, he worked for the largest retailer of U.S. coins at the time, James U. Blanchard and Co, where he served as the head of its rare coin division.

Going out to dinner with peers gave Contursi the first taste of fine wine, but it was a fellow coin dealer who turned Contursi into a wine collector, which eventually led to Arrow and Branch.

“He introduced me to Bordeauxs and Burgundies and really high-end stuff, which wasn’t very expensive back then compared to today,” Contursi said. “And I just got hooked on it.”

“I was drinking gin and tonic and beer, and I said, ‘Well, this is a lot better and it doesn’t give me as much of a headache.’ So I got passionate about collecting it.”

Contursi recalls negotiating with restaurant sommeliers to buy expensive wines in bulk, knowing that they would only go up in value with age. In 1978, he bought his first Bordeaux future, meaning that he purchased the wine while it was still maturing in barrels. He continued purchasing futures until 2005.

So, when Contursi was looking at a second home to take his kids during their school vacations, Napa, the wine capital of the U.S., came to mind. He had imagined a nice home in the valley with a couple of grape vines nearby, and on the second trip up to look at estates, Seanne and Contursi seemed to have found the perfect place.

They closed on the estate in 2007, which happened to be previously owned by Tony Soter, who’s well-known in the wine industry for bringing organic farming to Napa Valley and starting Etude Winery.

In March of 2008, the Contursi family was faced with a decision.

“What should we do with these grapes?” Contursi asked, recalling the conversation from nearly 14 years ago. “I looked at Seanne and said, ‘When are we ever going to have a chance to make wine? What a concept.’”

That was the beginning of Arrow and Branch. The wine company now plants around 3.5 acres of Cabernet Franc grapes, after they bought the adjacent lot to their property in 2012. On average, Contursi said, that’s an average of 500-600 cases of 12 wine bottles every year, ranging from $42 to $225. But when combined with other harvested years, it comes out to about 2,000.

It was never about money for Contursi, though. After 14 years of growing grapes and producing wine, Arrow and Branch is finally turning a good profit. The quality of the wine was always top of mind not only for the Contursi’s but also for their winemaker, Jennifer Williams.

“It’s been very rewarding,” Contursi said. “We stuck to the right thing. We didn’t put it in the bottle unless it was what we thought was as perfect as can be.”

Now, Arrow and Branch is expanding and is in the process of building a new winery. The vines were harvested this year, and the goal is to break ground on a modification of the existing building before the end of 2021.

That winery will have a designated crush facility, with the capacity to make about 15,000 cases of wine per year, which is only a fraction of what Arrow and Branch makes. Contursi is planning to lease out that space so other wineries can produce their wines in a “high-end, white-glove winery,” he said.

The rare coin business is evolving too. While Contursi still serves as the CEO of Rare Coin Wholesalers, his son Michael is helping modernize the company in his role as president. Contursi describes it as moving into the 21st century.

That means using a lot of modern trading formats and platforms, but it also means rebranding the company to focus on the strengths of investing in rare coins.

A growing number of people are seeing the benefit of rare coins in an era with high inflation and fears of the stability of the government, Michael said. These coins are private and portable and hold value, derived from historical events and from the metals of which they’re made.

To prove that point, Blackstone, one of the largest investment firms in the world, recently acquired one of the two companies responsible for verifying the value of rare coins and other collectible items, known as the National Guarantee Corp. Most coin collectors use a 70 point scale to determine the quality of an item, with 70 being a perfect uncirculated coin, and a 1 being an unrecognizable circulated coin.

In the past few years, Rare Coin Wholesalers has narrowed its client base to a few hundred families. It’s in the process of transitioning out of the broader wholesaler market, in which coins get lost in the shuffle to establish close relationships with like-minded collectors who see the value in holding items for a long period of time.

“Our goal is to build great relationships from people that we meet through each of our businesses, work with people that are like minded that you want in your life, and let them benefit off of what you’ve built and figure out ways to continue to grow and evolve and build,” Michael said. “We’re an entrepreneurial family so it’s kind of in our blood really.”