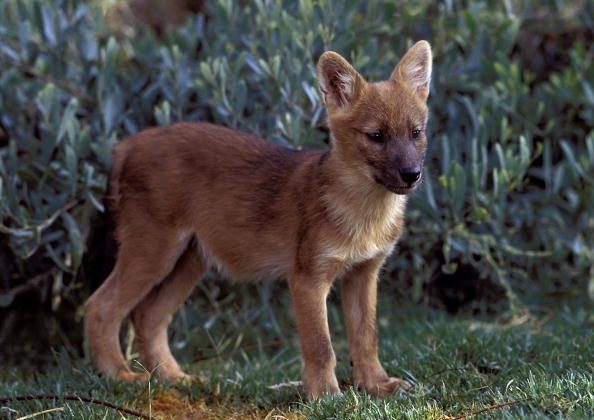 In yet another good news for wildlife lovers in India, the Jaldapara National Park in northern part of West Bengal recently become the newest home of the Asiatic Wild Dog (Cuon alpinus). Commonly known as the Indian Wild Dog or dhole, the IUCN red list categorizes the canines as an endangered species and have been seen for the first time in Bengal.

The DFO of Jaldapara wildlife division, Rajendra Jhakhar, confirmed that the rare predators were spotted in the Kodalbasti area of the national park sometime last week.

“There were four to five wild dogs in the pack, and one of them was dragging a kill, a hog deer, into the bush when one of our forest guards managed to record the video on his phone camera that was placed near the site prior to the animal’s arrival.”

“The dogs were sighted crossing a road in the area three months back, but our forest guards couldn’t manage to capture an image then. It seems the same pack has settled in the area. And we hope they are breeding too,” said Jhakhar.

Bhattacharya also pointed out the Jaldapara region is contiguous with Mahananda and Buxa areas, and hence it is highly likely that the carnivores had migrated to this part of north Bengal.

State wildlife advisory board member, Animesh Bose reiterated that there had been unconfirmed reports of the presence of the species in Chilapata about three to four years ago.

“It seems this is the same pack, and they have been photographed probably for the first time,” he added.

Dwindling Numbers: A Matter Of Concern

IUCN data records that there are fewer than 2,500 mature Asiatic wild dogs remaining in the wild, and that the population of the endangered species may continue to decline in the future. Main threats to their survival include ongoing habitat loss, inter-species competition, depletion of prey base, indiscriminate persecution, and also possible disease transfer from feral and domestic dogs.

Most of the dholes that live outside or in the fringes of core protected areas are highly vulnerable to conflict with humans. In fact, during a radio-tracking study in the buffer zone of the Kanha Tiger Reserve in central India in 2000, the surveyors discovered that at least 16 out of the 24 dholes in a particular pack died all of sudden from lethal poisoning, indicating conflict with humans.

Dholes are quite effective as predators when hunting in packs. Reports from Bandhavgarh in central India point out packs stealing kill from tigers and even killing the big cat.

The dog is found throughout most of northeastern region of India, particularly in the states of Assam, Meghalaya, Arunachal Pradesh, and West Bengal. They are also found in various regions in the country south of the Ganges River, especially in the Central Indian highlands, and the Eastern and Western Ghats of the southern states of the country.

However, experts believe that the species’ historical range could have included all or most of the Malaysian peninsular as well as the Indonesian islands of Java and Sumatra.