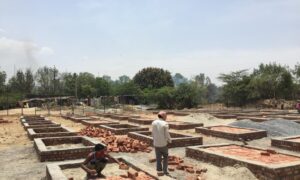 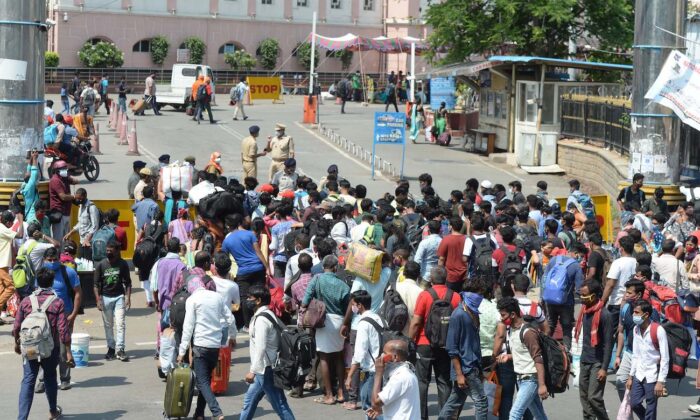 People wait in line outside a railway station to return home during the first day of a government imposed 10-day lockdown to curb the spread of COVID-19 in Secunderabad, India, on May 12, 2021. (Noah Seelam/AFP via Getty Images)
India

A rare but potentially deadly infection dubbed “black fungus” by Indian doctors appears to be more frequent among CCP virus patients in the world’s second-most populous nation, according to reports.

The infection, called mucormycosis, is caused by a group of molds called mucormycetes found particularly in soil and is associated with decaying organic matter such as rotting leaves and wood, compost piles, and animal dung, according to the Centers for Disease Control and Prevention (CDC).

There have been tens of thousands of cases of mucormycosis reported in India in the past month, compared to just a handful over the past decade, Dr. Bhakti Hansoti, associate professor in the department of emergency medicine and international health at the Johns Hopkins Bloomberg School of Public Health, told USA Today.

“We’ve seen this skyrocket in recent weeks,” she said.

Hansoti added that symptoms of the disease tend to arise two to three weeks after a person is infected with the CCP (Chinese Communist Party) virus. India recorded 362,727 new cases and 4,120 new deaths from the CCP virus on May 12, according to Johns Hopkins University data.

Cases of the fungal infection in CCP virus-recovered patients is “nearly four to five times than those reported before the pandemic,” said Atul Patel, an infectious diseases specialist based in Ahmedabad, Gujarat, and a member of the state’s COVID-19 task force, Agence France-Presse reported.

Depending on where the fungus grows, it has the ability to attack the skin, lungs, digestive system, brain, or areas surrounding the sinus and can eat away at facial structures including the nose, mouth, and eyes. The fungus can more likely cause an infection in those with weakened immune systems. People can come into contact with the fungus directly via a cut or trauma in the skin, or indirectly by breathing in fungal spores.

Symptoms of mucormycosis can include headache, nasal or sinus congestion, and pain due to black lesions on the nasal bridge or the mouth. Others may experience more lung-related symptoms including fever, chest pain, and shortness of breath.

As India faces a shortage of medical oxygen—a treatment that can relieve a lack of oxygen in the blood due to pneumonia following infection from the CCP virus—steroids are instead being prescribed to many patients as treatment for the virus. Steroids can reduce the hyper-inflammatory response that arises from COVID-19 and can help people with breathing difficulties. But steroids also weaken a person’s immune system, thereby making them more vulnerable to being infected with the mucormycetes molds, Hansoti told USA Today.

She added that diabetes is a prime risk factor for being infected with “black fungus.” Up to 75 percent of mucormycosis cases occur in CCP virus patients with diabetes, she said, adding that due to lack of routine testing, there’s a high prevalence of uncontrolled diabetes in India.

India’s health ministry on May 9 shared an advisory first posted by the government-funded Indian Council of Medical Research on how to treat the infection. “Mucormycosis—if uncared for—may turn fatal,” part of the advisory reads. Recommendations include continuing personal hygiene practices, being cautious when handling soil and other wet materials that may contain fungus, and discontinuing steroids or other drugs that suppress the immune system as soon as possible.

The overall mortality rate of the fungal infection is about 50 percent, but early diagnosis and treatment can increase the chances of survival, according to the CDC. The condition is treated with certain prescription antifungal medications, and may need surgery to remove any infected body tissue.