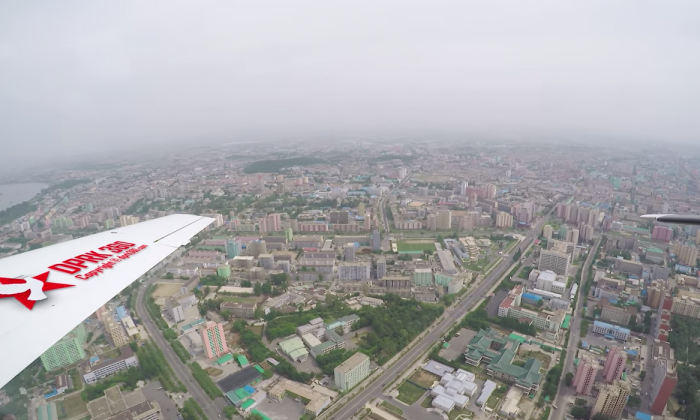 A Singaporean national, Aram Pan, recorded video footage of Pyongyang while visiting the North Korean capital in May as part of a project called DPRK360, which aims to bring rare images of life in the reclusive state to the outside world.

The 41-year-old soared over the city in a Piper Matrix PA-46 light plane. Pyongyang was reported to have a population of 3.26 million as of 2008.

The video shows a capital city that is very quiet in comparison to other cities with 3 million inhabitants, with streets that are seemingly deserted.

The footage, taken in May, followed a period of extreme tension in April between North Korea, South Korea, and the United States. During this time, Kim Jong-Un was announcing war threats on a daily basis, while the U.S. and South Korea conducted joint military drills on the Peninsula.

According to an April 12 report from the Russian Pravda Report, Kim may have ordered an evacuation of Pyongyang around this time. If true, more than 600,000 residents, or around 25 percent of the population, would have vacated the capital.

Pan’s video does not help to confirm or deny that the rumoured evacuation took place, as given reports of the city’s reported eeriness, the lack of traffic and people could be more or less normal for Pyongyang residents.

But in April, Kim would have had ample reason to call for an evacuation. Reports dated between April 10 and April 12 from Pravda and others (before Pan’s video in May) say Chinese netizens described movement of auxiliary troops and doctors towards the North Korean border.

Taiwan’s China Post reported on April 9 that 150,000 Chinese soldiers may have been sent to the North Korean border, hinting that perhaps Xi was anticipating a possible flow of North Korean refugees into Chinese territories.

Russian troops were also reportedly mobilizing towards the border. U.S. intelligence was aware of the movement of troops around the North Korean border, according to Free Beacon.

While Russia denied heightened troop activity at their border, initial reports from Chinese state-owned Global Times confirmed Chinese intentions for a strong military presence near the border in the case of escalated tensions on the Korean Peninsula.

Rowan Callick, China correspondent for The Australian, commented that the Global Times report was highly unusual given that it sourced information from South Korea’s Yonhap news agency.

Shortly after on April 12, the Global Times took its initial report that supported the view that China would “send out troops for sure” in the event of military conflict on the Korean Peninsula off the internet.

Read the deleted report in this tweet by Jeff M. Smith, Director of Asian Security Programs at the American Foreign Policy Council:

The Global Times then changed its tune and began refuting reports that China was prepared to mobilise its military to strike Pyongyang, in chorus with with North Korean state media.

South Korean Chosun on April 10 and various other sources corroborated reports the Chinese authorities were removing information on the internet related to the mobilization of Chinese troops to the border.

A Japanese media Sankei Shimbun report on April 9 said the now-deleted Chinese social media reports of China’s mobilized troops was in response to the prospect of preemptive military attacks on North Korea.

This flip-flop in the official Chinese media may be another hint at the ongoing instability within the leadership of the Chinese Communist Party.

A China affairs expert, Don Tse, told Epoch Times that under the leadership of Hu Jintao, China made an attempt for the denuclearization of North Korea.

But according to Tse, Hu’s efforts were undermined by the then-Chinese security czar, Zhou Yongkang, whose alliances lay with Jiang.

It appears that the ongoing infighting between factions of the Chinese Communist Party continues to limit what Xi can do about North Korea.

According to an Epoch Times report, Xi is not likely to see Pyongyang’s current antics as benefiting the Chinese nation.

In a conversation with members of the press corps in July, President Trump commented on what he views as challenges for the Chinese leadership. The Presidents of the world’s two major powers met to discuss North Korea in depth at Trump’s Mar-a-Lago Estate on April 6. Trump told reporters that he knows China is facing its own tensions with North Korea. “He [Xi] doesn’t want 50 million people pouring across his border,” said Trump.

Trump continued, “They have pressures that are tough pressures, and I understand. And you know, don’t forget, China, over the many years, has been at war with Korea — you know, wars with Korea. It’s not like, oh, gee, you just do whatever we say. They’ve had numerous wars with Korea.”

“You always have to understand the other side,” Trump said.

Earlier in the year, Trump had expressed confidence that Xi would be able to help contain North Korea.

Trump’s tweets provide some insight into his discussions about the threat of North Korea with Xi, albeit no insight into the complex dynamics of political tussles within the Chinese regime.

But Trump’s tweet on April 29 suggests that things related to factional alliances between Chinese groups as well as North Korea’s current dictator Kim Jong Un, in the absence of his uncle, had not made any significant breakthroughs.

On Sept. 3., Kim detonated what has been reported to be a hydrogen bomb—his most recent nuclear test. Such provocatory nuclear tests continue to cause international concern.

Trump tweeted in response on Sept. 3

The U.S. Geological Survey and other seismic monitoring agencies reported a man-made quake on Sept. 3 near the Sino-Korean border registering at 6.3 on the Richter scale. Japanese and South Korean officials said the blast was around 10 times more powerful than a quake they detected a year ago after Kim’s last nuclear test.

President Donald Trump said following a phone call with Chinese leader Xi Jinping on Sept. 6 that they both still agree on the importance of denuclearization in North Korea.

“I believe that President Xi agrees with me 100 percent. He doesn’t want to see what’s happening there, either. We had a very, very frank and very strong phone call,” said Trump.

As The Epoch Times previously reported, the China and North Korea relationship was cultivated under Jiang Zemin’s reign.

Jiang and Kim Jong Un’s father, Kim Jong-il, meet in Beijing in 2004 when the two communist leaders were photographed in a fraternal embrace. In contrast to Jiang faction members, who cultivated ties with North Korea during high-profile diplomatic visits, Xi has not visited Kim Jong Un. But he had met several times with recently ousted South Korean president Park Geun-hye.

Although Jiang is not officially in power, his network of alliances is still exerting its influence over parts of China’s communist regime. According to Epoch Times, this is true in regards to North Korea, where Xi Jinping does not seem to be in full control.

North Korea is home to 25 million people, which is just shy of the population of Texas.