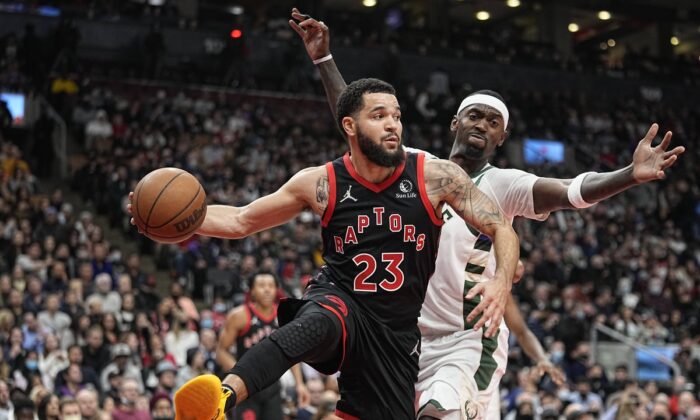 Fred VanVleet scored 26 of his 29 points in the second half and the Toronto Raptors ended the visiting Milwaukee Bucks’ eight-game winning streak Thursday night with a 97–93 victory.

Milwaukee was without Giannis Antetokounmpo (sore calf). DeMarcus Cousins (rest) also did not play after making his Bucks debut on Wednesday.

Pascal Siakam added 20 points before fouling out in the fourth quarter for the Raptors, who ended a five-game home losing streak. Scottie Barnes added 13 points for Toronto.

Toronto led by 11 in the third quarter and took a five-point edge into the fourth.

Milwaukee pulled to within two points with 9:28 left, but Toronto scored the next seven points. Allen’s 3-pointer cut the deficit to three with 6:16 remaining. After Milwaukee moved to within two, Toronto went on a 6-0 surge, completed by a jumper by Barnes.

Portis hit a 3-pointer to trim the deficit to three with 33.1 seconds to go. VanVleet made two free throws to bump it to 95–90 with 19.5 seconds left. Middleton then made two foul shots, and Portis made one of two to cut the margin to two.

Pat Connaughton missed a 3-point attempt that would have given the Bucks the lead.

The Raptors used a 9–0 run capped by Yuta Watanabe’s 3-pointer with 5:58 to play in the second quarter to lead by seven. Toronto led 48–40 at halftime.

Milwaukee scored the first four points of the third quarter. The Raptors opened an 11-point lead with 6:50 remaining on Precious Achiuwa’s 10-footer.

Holiday made two consecutive 3-pointers to cut the deficit to four with 4:09 left. The lead returned to 11 after Chris Boucher’s dunk with 1:05 remaining. Middleton scored the final five points of the third, cutting the deficit to 73–68.