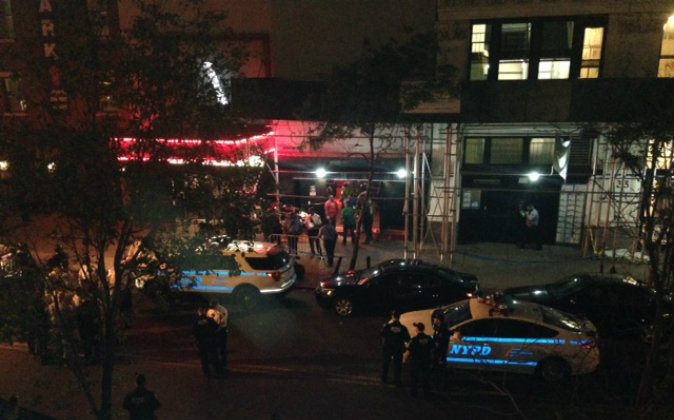 Authorities stand outside Irving Plaza, near Manhattan's Union Square in New York after a shooting Wednesday, May 25, 2016. Police say several were injured in a deadly shooting inside the concert venue, where hip-hop artist T.I. was scheduled to perform. (AP Photo/Dana Schimmel)
New York

Rapper Troy Ave. has been arrested for the Wednesday, May 25, shootings at New York City’s Irving Plaza that left one dead and three injured—including himself.

Troy Ave., his real name Roland Collins, was charged with attempted murder and criminal possession of a weapon the day following the release of video footage that appears to show the Brooklyn rapper firing a weapon as patrons cower in fear nearby.

In the chaotic moments, 33-year-old Ronald (Edgar) McPhatter was shot in the stomach and later died at Beth-Israel Hospital. McPhatter and Collins were childhood friends. New York City detectives are currently waiting for ballistic test results to determine if Collins’s bullet was the fatal shot. He can possibly face additional charges.

Bronx model Maggie Carrie Heckstall was shot in the leg, and another man, Christopher Vinson survived a bullet to the chest. Collins inadvertently shot himself in the leg and drove himself to the hospital.

The night began as a concert show headlined by three-time Grammy award-winning hip hop artist T.I., who had yet to perform when the melee ensued. Brooklyn rappers Maino and Uncle Murda were on stage when the shooting happened.

Reportedly Maino and Collins are enemies, though the motive for the shooting is unknown.

“Everyone was hysterical, I was having a panic attack during the shooting, and the woman next to me was covering my mouth with her hand to try to get me to stop screaming,” said Liv Hoffman, 19, in an interview with the Associated Press.

In previous tweets from nearly six years ago, Collins disclosed to his Twitter followers that he’d never want to “catch a gun charge.”

Man i jus had a Nightmare that i got arrested with a Gun, i was mad upset

U shouldnt Carry A Gun If u are scared 2 Use It. You’ll only end up hurting yourself or a Innocent Person Real Talk

NYPD Commissioner William Bratton voiced his displeasure with the night’s events in a WOR Radio interview on Thursday morning.

“Basically thugs that basically celebrate the violence that they live all their lives and unfortunately that violence often manifests itself during the performances and that’s exactly what happened last evening,” he said. “The music, unfortunately, oftentimes celebrates gun violence, celebrates the degradation of women, celebrates the drug culture and it’s unfortunate that as they get fame and fortune, that some of them are just not able to get out of the life, if you will.”

“I think it’s not really right to see a whole genre through one eye,” he said. “There are some rap artists and folks in the hip-hop culture doing amazing, good things for the world.”

“When white people are doing this violence, I don’t hear the same language being used,” he said. Williams has worked on anti-violence initiatives with McPhatter and his older brother, Shanduke McPhatter, a former gang member.

“What triggered it [changing] was just the level of violence I kept seeing,” said McPhatter in an interview with Epoch Times. “I changed my state of mind.”

McPhatter feels his brother “got too much into” into the hip-hop scene.

In an interview with NYDailyNews, the mother of the deceased, Rose McPhatter expressed her disappointment in not hearing from Collins.

“If he cared about my son as much as he alleged he does, I would’ve received a call from him,” she said.

T.I. expressed his condolences for McPhatter’s family on Instagram.

“My heart is heavy today,” the rapper, whose real name is Clifford Harris Jr., wrote in an Instagram upload on Thursday. “Our music is intended to save lives, like it has mine and many others. My heartfelt condolences to the family that suffered the loss and my prayers are with all those injured.”

Collins is currently in custody and couldn’t be reached for comment.