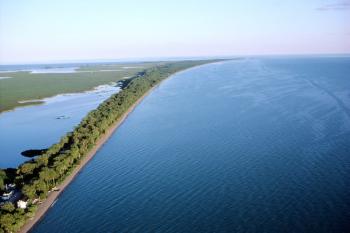 Aerial view of the coastline of Lake Erie, Ontario, Canada. A rapid response team is trying to prevent the Asian carp from entering the Great Lakes where it could cause ecological and economic damage. (photos.com)
US

Recent eDNA sampling have shown the existence of the carp nearly a mile within the two electric barriers designed to stop the fish from entering the Great Lakes.

The Illinois department of Natural Resources is leading the effort and taking immediate action to prevent the fish from reaching the Great Lakes via the Chicago Sanitary and Ship Canal (CSSC).

Last week, the U.S. Army Corps of Engineers performed scheduled maintenance on one of two electric barriers. They applied the EPA-approved fish toxicant rotenone to the canal between the barrier and the Lockport lock and dam.

The U.S. Fish and Wildlife Service has joined forces with the Asian Carp working group and the rapid response team in an effort to prevent the fish from entering the Great Lakes. The organization supports the planning and operations of the rapid response action by supplying personnel, equipment, and the necessary technical expertise.

“The rapid response team was formed to take immediate action in the face of a crisis,” said Ashley Spratt from the group’s public relations department. “We will take necessary action to prevent fish [from entering] should additional sampling show the presence of fish.”

Spratt says the large appetite of the foreign fish poses a direct threat to the native Great Lakes species, competing for the same food supply. However, she adds that the impact to commercial fishing due to reduced harvest of native fish is the most important reason for keeping the Asian carp under control.

“Most important is economic impact. U.S. and Canada are both commercial fishery epicenters. Fewer native fish results in reduced harvest and impacts the fishing industry,” Spratt stated in an email.

According to the EPA Web site, catfish farmers imported the Asian carp in the 1970s to remove algae from their farming ponds. However, floods in the 1990s overflowed the farming ponds and the carp were washed into the Mississippi River Basin.

Over the last decade the fish have made their way up the Mississippi River and are headed for the Great Lakes.

If left unchecked, the Asian carp could become a dominant species of the Great Lakes and would be difficult to control once it has spread.