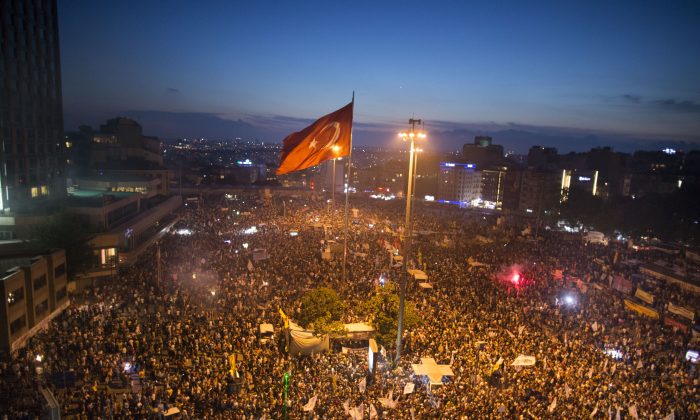 Anti-government protesters gather in Taksim Square in Istanbul, Turkey on June 8, 2013. What began as a protest over the fate of Taksim Gezi Park, has turned, after a heavy-handed response by police, into a protest over what is being seen as Prime Minister Recep Tayyip Erdogan increasingly authoritarian agenda. (Uriel Sinai/Getty Images)
Middle East

ISTANBUL—Until just two weeks ago, Turkey was touted a model for the Middle East and the Arab Spring nations. But now scenes of mass protest and violent clashes, similar to those of Egypt’s Tahrir Square in 2011, are changing the face of the nation.

For Erdogan, the hundreds of protests that have swept across Turkey since May 31, injuring nearly 5,000 and killing three must have come as a surprise.

In his own words, the protests came at “a time when the world was praising Turkey,” he said, addressing supporters gathered at Istanbul airport June 7 upon his return from a trip to North Africa.

Indeed, as a democratic Muslim-majority country with a flourishing economy led by a moderate Islamic party that is Western-oriented, Turkey has been frequently described as a successful model. Under Erdogan’s rule the country has seen a steady economic growth, and the doubling of its gross domestic product (GDP).

The anti-government protests started when the police forcefully broke up peaceful protests against the construction of a shopping mall on park grounds May 31. Protests are continuing despite efforts by police to remove protesters from the square Tuesday using large amounts of teargas.

Related discussion:What is the cause behind the riots in Sweden?

A string of events leading up to May 31, however, had already stoked the rage that burst into protests.

A week before the protest began, the Turkish Parliament passed a bill restricting alcohol sales and banning alcohol advertisements, a move criticized by some secular Turks. Large urban-planning projects, such as a third airport and a new bridge over the Bosporus, will uproot thousands of trees, environmentalists said.

Then, some Turks have felt comments by Erdogan have invaded their personal lives. For example, when he called on families to have three children, and when he railed against the Turkish soap opera “Magnificent Century.”

Freedom of expression has come under greater pressure in Turkey in recent years. In April, a renowned Turkish musician was given a suspended prison sentence for “openly insulting the religious values of public,” via Twitter.

According to the Committee to Protect Journalists, Turkey has 49 imprisoned journalists. Iran has 45. Many of them were detained as part of the government’s investigation into the alleged military plot, which authorities say was aimed at overthrowing the government through a military coup in 2003.

From the start of the protests, Erdogan went on the offensive.

He described protesters as looters. He called Twitter, which was used to organize most of the protests, the “worst menace to society.”

Erdogan also criticized business owners who had supported the protesters. “We have expanded the economy. The ones who said they are five times richer today have now turned against us,” he said at the airport Friday.

“Some accuse us for serving 50 percent. … We have never ignored any ethnicity, belief, or ideology. We have been servant of 76 million. When incident happens, we analyze thoroughly and take action. We never polarize,” he said.

Repeated calls by Erdogan for protesters to leave Taksim Square and end protests in the country have gone unheeded—instead Erdogan’s defiant approach has fueled the flames with Taksim Square continuing to swell with protesters.

In an interview with The Epoch Times, professor Mumtaz Soysal, who served as Turkey’s foreign minister in 1994 said: “The future of these events will depend on the attitude of prime minister and people around him. We see from recent events that politicians have not learnt their lesson or [have] failed to interpret the incident well. If they insist on their attitude, the end result for Turkey and the region will be worse.”

Soysal does not believe that Erdogan and his Justice and Development Party (AKP) will reverse any of their recent decisions, such as the limitations on the selling of alcohol. “They see this ban as indispensable,” he said. “These attitudes do not stem from rational thought, but stem from religious behavior which is their mistake, and Turkey cannot be ruled with these mistakes.”