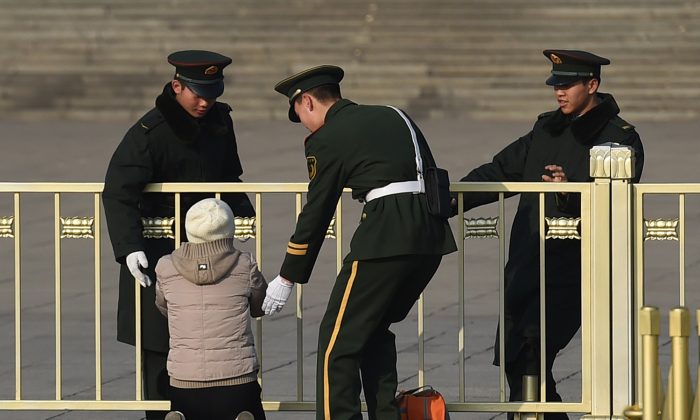 Paramilitary police officers stop a woman as she protests on her knees in front of the Great Hall of the People in Beijing on March 13, 2015. (GREG BAKER/AFP/Getty Images)
China

In 2006, a Chinese woman from the southwestern metropolis of Chongqing was abducted by a group of men who tied her up and brought her to a military hospital. There, she very nearly became a victim of forced organ harvesting—a business run by powerful groups in the communist regime that is believed to have killed tens of thousands of innocent people.

Now in her 40s, Deng Guangying looks and sounds like an average Chinese peasant woman. It was this appearance that may have gotten her onto the doctor’s chopping block, she said in a Jan. 24 interview with the New York-based broadcaster New Tang Dynasty (NTD) Television.

“That day, I was tied up by this group of people and sent to an operating room in the 324 Hospital of the People’s Liberation Army. I couldn’t move at all,” she said.

When a doctor arrived in the room and asked her for her consent in “voluntarily donating her organs,” she knew they wanted her life.

“I answered immediately, ‘this is not voluntary, I was dragged here by force. I will never donate my organs. I don’t want to die, I want to go home.'” Deng was saved only when the local chief of the paramilitary police barged into the room. “Deng Guangying has a relative working in the government,” he said. “The operation can’t continue.” They let her go.

When the gang of men broke into her rental home, beat her, stole all her valuables, and then abducted her, she had assumed they were ordinary criminals. Later, she realized the authorities had a hand in it. The men handling her were police and tried to make her sign legal documents giving up her organs, she said.

“I know people are secretly abducted,” Deng said. “Several people I know have been killed this way.”

When she refused to sign, the police threatened to mutilate her. She insisted, and her fingers were cut off. When she screamed, the police beat her until she had lost seven teeth and was deaf in her right ear.

Deng recalled the police saying, “Directives from the top: Those with healthy organs must donate.”

Unable to force her to sign the document, the police traveled to her relatives’ homes in Hechuan, a district of Chongqing, to pressure them.

First was Deng’s younger brother, who refused to sign the agreement. Her older brother gave in after being offered a bribe worth about $7,000.

What saved Deng was the fact that a relative of hers was an official at the Chongqing procuratorate. Her younger brother contacted this relative, who pulled strings with the police to cancel the operation, she told NTD.

According to human rights investigators, the Chinese authorities have been harvesting the organs of dissidents and prisoners of conscience since the 1990s. Reports estimate that 60,000 people, the majority of them adherents of the Falun Gong spiritual practice, have been murdered in this way between 2000 and 2008.

Search for Justice Ends in Rape

Incensed by her experiences, Deng Guangying tried to appeal her case. In Chongqing, this proved useless.

Zhou Hongliang, an official at the Chongqing complaint office, told her flatly that the men behind organ harvesting were none other than the city’s Communist Party chief Bo Xilai and his head of police, Wang Lijun. Under this political environment, it would be impossible to make any headway.

In 2013, when Bo and Wang were purged after losing a power struggle with new Chinese leader Xi Jinping, Deng thought she had an opportunity to see justice done.

She went to Beijing, but here even worse experiences awaited. With her relative unable to protect her, the police not only dismissed her case but took her to a field in the outskirts of the capital and raped her. The officers involved took photos and tried to force her to accept 100 yuan (about $15) in order to frame her as a prostitute.

When Deng turned out to be pregnant, the Beijing police forced her to drink a solution that induced miscarriage.

All the while, her attempts at petitioning met with threats, surveillance, and other forms of interference. Epoch Times was unable to independently verify the story of Deng Guangying.

“Many female petitioners are raped and murdered in Beijing,” Deng said. “Last year, the bodies of women and articles of clothing belonging to the police have been found beyond the hills of Lucun.”