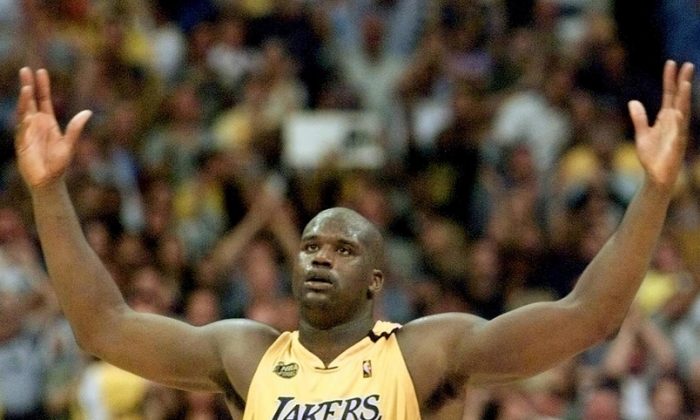 LOS ANGELES, UNITED STATES: Shaquille O'Neal of the Los Angeles Lakers celebrates a basket 09 June, 2000, during the first half of game 2 of the NBA Finals against the Indiana Pacers at Staples Centers in Los Angeles, CA. The Lakers beat the Pacers 111-104 to take a 2-0 lead in the best-of-seven series. (ELECTRONIC IMAGE) AFP PHOTO/Jeff Haynes (Photo credit should read JEFF HAYNES/AFP/Getty Images)
NBA

The NBA Playoffs have produced a number of great performances over the years. All-Stars like Michael Jordan were transformed into superstars with their achievements in the most pressure-packed moments of basketball’s postseason.

Here are the ten greatest performances since 1980.

By 2004, the Lakers were looking for redemption after San Antonio halted their championship streak at three, the season before. But facing an underdog Pistons squad, LA came out flat in Game 1 at home and lost. In Game 2, Detroit led again late in the game until Bryant drained a ridiculous, guarded three-pointer at the buzzer—from deep—to force overtime, where the Lakers would prevail. Bryant would finish with 33, though the Pistons would take the series.

With Olajuwon’s Rockets facing elimination, “The Dream” was at his best. Just 24 at the time, Olajuwon played 53 minutes of the double-overtime affair and scored 49 points, grabbed 25 rebounds, and blocked six shots—and it wasn’t enough. Seattle prevailed 128–126 to advance to the conference finals.

Despite being the game’s most dominant player for a number of years, Shaquille O’Neal only won one MVP and it was during the 2000 season, when he won his first title. In that year’s finals, Shaq, Kobe, and company squared off against the Indiana Pacers and in Game 1 “The Diesel” ran over Pacers center Rik Smits, scoring 43 points while grabbing 19 rebounds to set the tone in the series. LA would take down Indiana in six games.

The Pistons won titles in ’89 and ’90 and were this close to winning in ’88 as well. Leading three games to two as the teams headed to L.A. for Game 6, all the Pistons needs was one win in two games to take the series. In Game 6, Pistons star guard Isiah Thomas put the team on his back to score 25 points in the third quarter—despite visibly limping on a sprained ankle—and 43 for the game. Yet despite his heroics, the Lakers pulled out a one-point win and would take the series in seven.

Reggie Miller and the Pacers trailed by 12 points entering the fourth quarter of Game 5, when Miller went off. The Indiana star was fired up while taunting Knicks fan Spike Lee—who was sitting courtside—and Miller glared at Lee every time he hit a shot—and there were plenty of glares. Miller, who would retire as the game’s all-time leading three-point shooter, hit five threes in the final 12 minutes, while scoring 25 of his 39 points, as the Pacers stunned the Knicks winning 93–86.

With the series tied at 2 and the home team having won every game of the series, the Celtics and Bird knew how crucial their Game 5 at home was. Bird had an otherwise outstanding game—36 points, 12 rebounds, and nine assists—but it would have all been for naught had they lost and had to win at Detroit in Game 6 to stave off elimination. Down a point with seconds remaining, Bird was blocked at the rim and the ball was called out on Boston—Detroit possession. With five seconds left, Isiah Thomas quickly inbounded the ball before the Celtics could really set their defense—or so he may have thought. Incredibly, Bird came out of nowhere to steal the pass—at the Celtics end of the floor—and just before he fell out of bounds, found a cutting Dennis Johnson under the basket for the winning basket and suddenly the Celtics season was saved.

At this point early in his career, James wasn’t really noted as a clutch player. But he would soon change that reputation. “The King” took over this pivotal Game 5 late in regulation, scoring Cleveland’s final 25 points—and 29 of their final 30—including the game-winner with 2.2 seconds left as the Cavaliers beat the Pistons 109–107 in double-overtime, with James totaling 48 points. They would then go home to win Game 6 to take the series.

Jordan was already on the map as a star player, but this one propelled him to superstardom. Scoring with a variety of jaw-dropping moves around the rim, the 23-year-old put the Bulls on his back hitting 22 of 41 shots and 19 of 21 free throws for an NBA-record 63 points against the Boston Celtics—who would go on to win the title that season. Unfortunately for Jordan, his performance was for naught as the Bulls fell in overtime 135–131.

With MVP Kareem Abdul-Jabbar injured, the Lakers looked to point guard Magic Johnson to fill in at center and the rookie did that—and then some. Johnson, who last played center in high school, scored 42 points, grabbed 15 rebounds, and dished out seven assists in the Lakers’ 123–107 win that sealed the championship.

It’s so well-known, that you don’t even have to mention Jordan’s name when referencing it. The Bulls star—who already had four titles by that time—had to reach deep for this one. Dehydrated and clearly exhausted, Jordan—who needed help just getting back to the bench—gutted out a 38-point performance to lead the Bulls to a 90–88 win to break the 2–2 tie and send the series back to Chicago needing only one win to seal the title.