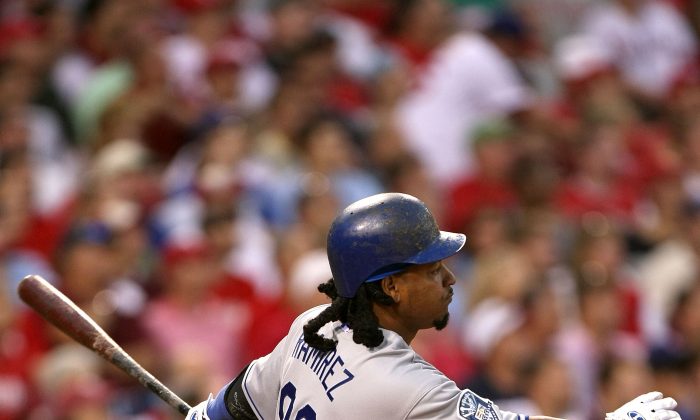 Manny Ramirez went on a tear after being dealt from Boston to Los Angeles, helping the Dodgers to a division title. (Jed Jacobsohn/Getty Images)
Baseball

Remember two summers ago when then-first place Oakland went all-in and gave up top infield prospect Addison Russell to Chicago for veteran pitcher Jeff Samardzija? Me neither (I had to look it up). That’s because the A’s went belly-up (54–33 record before the trade, 34–41 after) following the ill-fated deal and had to settle for a spot in the all-or-nothing wild card game—which they lost to Kansas City.

That’s an example of a non-impactful deadline trade. The team in contention actually got worse after making the trade.

Fortunately for the teams that are buyers in this summer’s trade market, there’s a long list of trade deadline deals that have worked out.

Here are the five most impactful such trades over the last 25 years.

Manny was just being Manny when he reportedly was unhappy with his team option for the next year (2009) with the Red Sox, forcing them to trade him. The team netted Jason Bay from the Pirates in the three-team deal. But the Dodgers made out like bandits as a suddenly free Ramirez tore up the National League for the remainder of the season.

The partial-season performance netted Ramirez a fourth-place finish in the NL MVP voting and got him a two-year, $45 million deal from Los Angeles in the offseason.

Johnson was heading toward free agency when the Mariners decided to deal him to Houston for prospects (Freddy Garcia, Carlos Guillen, and John Halama) at the trade deadline in 1998. Though he was struggling with a 9–10 record and a 4.33 ERA at the time of the trade (July 31), “The Big Unit” took off in Houston.

In 11 starts, Johnson went 10–1 with a 1.28 ERA in 84.1 innings, while striking out 116 batters. Included in that ridiculously dominant stretch were four shutouts as the Astros went 37–16 after his arrival, to sew up the NL Central title. Johnson, meanwhile, finished seventh in the NL Cy Young voting, despite pitching in just 11 games.

In late June of 2000, the two-time defending World Champion Yankees were middling in second place with a record of 38–36 and in need of a spark.

Though Justice was never quite as dominant as some of the other names on this list, his presence and production helped ignite New York to their third straight World Series title. The 34-year-old outfielder—who was acquired from Cleveland for Zach Day, Ricky Ledée, and Jake Westbrook—hit an impressive .305/.391/.585 with 20 home runs and 60 RBIs in 78 games for George Steinbrenner’s squad.

Meanwhile, the team caught fire, winning 46 of their next 70 games before coasting (losing 14 of their final 17 games) to and through the playoffs where they beat Oakland, Seattle, and finally the Mets in the World Series to go back-to-back-to-back.

McGriff’s arrival in Atlanta in 1993 helped the Braves win one of the most thrilling pennant races ever. The final year of the four-division format, Atlanta—which had made back-to-back World Series appearances, was “only” 53–40 at the time (July 18) of the trade. Though they had a respectable record, they trailed red-hot San Francisco by a whopping eight games.

The Braves quickly caught fire after the deal—and never slowed down. Atlanta went an eye-popping 51–18 the rest of the way to edge San Francisco by a game on the final day of the season—104–58 to 103–59 for the Barry Bonds-led Giants.

McGriff would go on to finish third in the MVP voting, though the Braves—perhaps emotionally exhausted from just having to catch the Giants—lost in the NLCS to the Phillies.

Remember that collapse by Oakland in 2014 after trading for Samardzija? Perhaps it was no coincidence that that same A’s season went downhill after they also dealt Yoenis Céspedes to Boston for ace Jon Lester, later that month.

Just look at his impact on the Mets the very next year.

Starving for a big bat in a rather punchless lineup, New York sent minor-leaguers Luis Cessa and Michael Fulmer to Detroit for Céspedes (traded in the offseason to the Tigers) to try and support a talented starting rotation.

It was well worth the price.