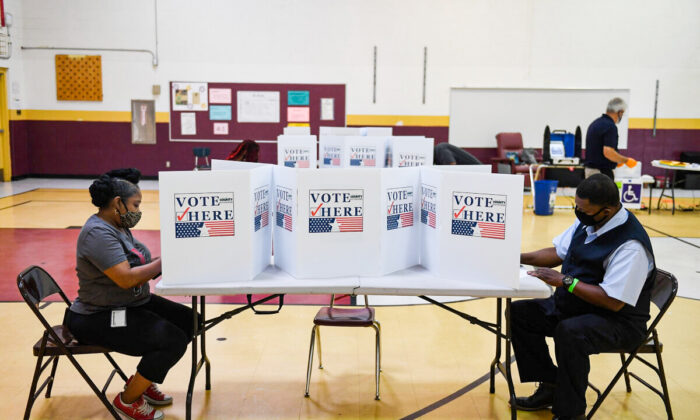 Proponents are gearing up for stretch-run petition drives to secure signatures needed to get prospective constitutional amendments implementing ranked-choice voting on 2022 ballots in Missouri and Nevada.

The Missouri Top-Four Ranked-Choice Voting Initiative would give voters the option to pick from both Republicans and Democrats during open primaries and vote in all general elections for either a number one choice, or rank picks from the four highest-vote-getting primary candidates.

Sponsor Better Elections Missouri needs 160,000 signatures by May 8 to get its proposed ranked-choice voting (RCV) measure on the state’s Nov. 8 ballot.

After the Missouri Republican State Committee adopted a resolution opposing RCV as a confusing system that “eliminates one person’s fair and honest voting method,” the House passed House Joint Resolution 131 in a partisan vote.

If adopted by the Senate before the legislative session adjourns on May 30, HJR 131 would be a rival prospective constitutional amendment on Missouri’s ballot that would ask voters to choose only one candidate for each office, as they do now.

Sponsors Nevada Voters First and the Institute for Political Innovation need 135,561 valid signatures by June 21 to get onto the ballot.

Not all RCV proposals are the same, but generally, unlike winner-take-all elections, under the system, all primaries are open with the top X number of vote recipients advancing to the general election.

In RCV general elections, voters aren’t limited to picking one candidate, and a winner is not declared until one candidate receives over 50 percent of the votes.

If no candidate receives 50 percent, the candidate with the fewest number of votes is eliminated, and the votes are counted again. If a voter’s top choice was eliminated, that vote is given to that voter’s second-choice candidate. The process is repeated until one candidate tops 50 percent.

Supporters, such as Maryland-based FairVote and The Ranked Choice Voting Resource Center in Goldsboro, North Carolina, maintain that election winners should have more than 50 percent of the electorate and that RCV limits the “spoiler” effect of minor-party candidates, and chips away at incumbents’ advantages.

Opponents include those incumbents, who say the process is too cumbersome, leads to more electoral stalemates, and would require a significant investment in technology to upgrade voting systems to allocate and reallocate votes.

RCV was first adopted on a statewide basis in the United States in 2016 by voters in Maine for state Legislature and governor elections.

In November 2020, voters in Alaska adopted Ballot Measure #2, a constitutional amendment sponsored by Alaskans for Better Elections, to implement RCV for all elections, beginning with this year’s elections.

That same year, voters in Massachusetts rejected an RCV measure, and a petition effort to get an RCV proposal on North Dakota’s ballot fell short.

As of April 1, only Maine and Alaska had RCV statewide, but 46 cities—including New York City, San Francisco, and Minneapolis—across ten states had adopted the process.

In Utah, 23 cities, including Salt Lake City, are participating in a 2019–25 pilot program that allows municipalities to use RCV.

RCV has been adopted at the local level but not implemented in seven states, including Florida, Oregon, Vermont, and Tennessee, where lawmakers in February adopted Senate Bill 1820, which precludes RCV in state-level and local elections.

According to the National Conference of State Legislatures (NCSL), since 2021, 49 RCV bills have been introduced in 22 state legislatures, but none other than several technical type measures, such as one in Utah tweaking its pilot program, have been adopted.

In the last two years, six bills in five states proposed RCV for primary elections; none have been adopted. One failed measure in one state called for RCV only in presidential elections, while there are stymied bills in Illinois and Kentucky seeking to adopt the system for all state elections.

One Vermont bill and three Hawaii bills that would make all elections RCV was introduced in 2022 and remain technically alive. Three 2021 Minnesota bills proposing RCV for all elections failed to advance.

Lawmakers in New Jersey are likely this year to adopt a proposal to create a commission to study RCV, while a smiler proposal in Rhode Island 2022 was set aside by the House State Government & Elections Committee for further study.

A California bill seeking to end RCR voting in the seven cities across the state that have adopted the system, including one where it will be implemented in 2023, has failed to advance and is unlikely to do so.