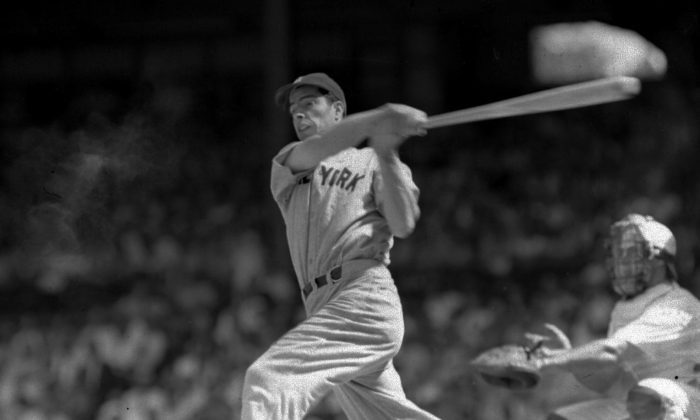 The 75th anniversary of Joe DiMaggio’s still record-setting, 56-game hitting streak came and went on July 17, reminding everyone of what is still one of the most impressive achievements in the long history of baseball.

As impressive as DiMaggio’s streak is, though, it’s not the most unbreakable mark out there.

For instance, no one’s touching Cy Young’s 511 career wins, Old Hoss Radbourn’s 59 single-season wins, and Will White’s 75 complete games and 680 innings pitched in 1879. All are pitching records from over a century ago that are physically impossible to break given how modern hurlers are taken care of today.

But how about just offensive records? Here are the ten most unbreakable:

When Chicago’s Hack Wilson drove in his record-setting 191 runs for the Cubs back in 1930, it was nearly broken the very next year when Lou Gehrig drove home 185. Six years later, Hank Greenberg totaled 184 and the next season Jimmie Foxx put up 175.

But no one has really come close since.

Rickey Henderson had 130 steals as late as 1982 and Vince Coleman had three straight seasons of 100-plus steals in the mid-1980s, but no has reached triple-digits this millennium. Since the start of the 2000 season, Jacoby Ellsbury’s 70 steals in 2009 and Scott Podsednik’s 70 in 2004 are tied for the most—barely half of Nicol’s incredible haul (although between 1886 and 1897, steals were awarded for taking an extra base on a hit by another player).

Yes, the ageless Ichiro Suzuki now has more career professional hits if you include his totals from Japan, but if we open up the record books to other leagues this will take way too long. Yet the fact that he’s soon to be the latest member of the 3,000-hit club—despite not starting his MLB career until age 27—shows that it’s at least humanly possible, if not probable.

For all of Derek Jeter’s greatness, his 3,465 career base-knocks is sixth all-time, and he still finished his career nearly 800 hits behind Rose’s total—the equivalent of four prime seasons.

Yes, Bonds is also the all-time and single-season home run king, but he’s so far and away the leader in this category that the walking marks are his most untouchable feats. Think about this: when 36-year-old Albert Pujols (who’s in second place) gets his next intentional pass, it’ll be his 300th—not even halfway to Bonds’s incredible total.

Although there is plenty of suspicion about how Bonds suddenly enjoyed a career resurgence from ages ages 37 to 40, the numbers are in the books and they are incredible.

If you don’t know who Chief Wilson is, you’re not alone. He retired way back in 1916 and aside from his league-leading 107 RBIs in 1911, this is the only time he led the league in an offensive category—and he’ll likely have this record forever.

Because outfield defenders are faster today—and because some stadiums in Wilson’s time had very long fences, or in some cases none at all—the triple is much rarer in today’s game. Only three players have ever reached the 30-mark in a single season and Wilson is the only one to do it since 1900. Yikes.

The only player to even hit more than 22 since 1950 was current Mets outfielder Curtis Granderson, who had 23 in 2007 with Detroit—not even two-thirds of the way to Wilson’s 36.

Both are records and no one is likely touching either of these. So feared was Bonds in his prime, he even drew an intentional walk with the bases loaded against Buck Showalter and the Arizona Diamondbacks back in 1998.

DiMaggio’s incredible feat way back in 1941 somehow managed to overshadow Ted Williams’ .406 average—still the last time anyone hit .400 in a season—and the Yankee Clipper took home MVP honors that season.

Here’s why this record—which probably will never be broken—is still not as untouchable as the ones below: someone in this day and age could conceivably be much better than everybody else over a two-month period—it’s at least physically possible.

The triples records aren’t going anywhere because of how the game is played nowadays, and neither is a season-long batting average of .440 or a career average of .366—both are virtually impossible with the way teams use their bullpens.

A two-month record of roughly the same batting feat is slightly more probable though. The daily media pressure a hitter would face would certainly make it hard.

With another of the lesser-known records, Crawford is the only member of the 300-triple club and he hit his last one all the way back in 1916—100 years ago.

Only seven other players have even reached the 200-club and all of them started their careers more than a century ago.

The only player to retire with at least 150 triples in the last half-century is Roberto Clemente who totaled 166 three-baggers before he tragically died following the 1972 season. No one is touching this record.

If you’re wondering who Hugh Duffy is, you’re not alone. Duffy also retired more than 100 years ago and his magical .440 season was way back in 1894.

With the advent of today’s potent bullpens with fireball relievers, no hitter has hit even .400 in three-quarters of a century, with Tony Gwynn’s .394 in the strike-shortened season of 1994 and George Brett’s .390 in 1980 being the closest. They were still a ways off from the .440 mark though.

This is a longevity record that likely will stand forever. The last player to even hit for .366 in a single season was Ichiro when he hit .372 in 2004. Ichiro’s career average is a very respectable .314, by the way, but the 42-year-old has zero chance at catching Cobb (who retired in 1928).

Even the late, great Gwynn—the best pure contact hitter of his generation—had a career average of “only” .338—good for a tie for 18th place, which places him among a cluster of hitters from Cobb’s long gone era of a century ago. Gwynn and Ted Williams (.344 career average) are the only two hitters in the top 20 of this list who retired after World War II and both were significantly behind Cobb.