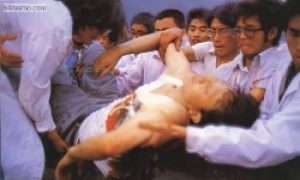 The Rangers battled hard with the Hurricanes throughout the first and second periods. Both teams had several quality scoring chances, but Cam Ward of the Hurricanes and Henrik Lundqvist of the Rangers were impenetrable in the net.

In the second period, Ward had an impressive glove save, stealing the puck out of midair on a Marc Staal slap shot.

After 48 minutes of hammering each other, pounding the net, and countless scoring chances, the Rangers broke through the wall, scoring first on a Matt Gilroy wrist shot. Gilroy who started out the season slowly has now picked up pace by having four points in his last five games.

Five minutes later the Hurricanes put themselves back in the game with a goal by Eric Staal, brother of Rangers assistant captain Marc. Eric’s goal came off a rebound that might as well have been a pass.

The game provide a boost for the Rangers who recently had a tough trip in Florida losing to the Tampa Bay Lighting in overtime 2–1 and being shut out by the Florida Panthers 3–0.

Rookie Mats Zuccarello played a solid 14 minutes with 17 shifts scoring his first goal. “Scoring my first goal was something special,” said Zuccarello. “It was a lucky goal.”

Even though Sean Avery and Brandon Dubinsky didn’t score, both skated exceptionally well and were critical components to the Rangers success. Dubinsky had two helpers.

With the victory, the Rangers solidified their seventh place standing, putting some distance between themselves and the eighth place Montreal Canadiens. The Atlanta Thrashers also won on Wednesday to stay a point up on the Rangers.

As the Rangers approach the All-Star game and midway point of the season they continue to play consistent hockey behind their stalwart goaltender Henrik Lundqvist.

But last year’s goal scoring leader Marian Gaborik has yet to perform to expectations. He missed a quality scoring chance in the second period.

One difficulty the Rangers have been having all season is finding a way to score. It was something they managed to do enough of on Wednesday.

“As we got the goal I was just thinking to myself on the bench, that’s the way we have to play,” said head coach John Tortorella.

The next challenge for the Rangers is the Dallas Stars in Dallas on Friday. They play a physical brand of hockey and are No. 1 in the Pacific Division.

The game will be a good opportunity for the Rangers to measure themselves against an elite team from the Western Conference.