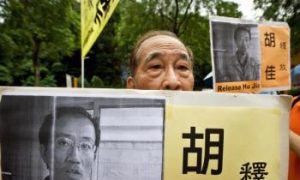 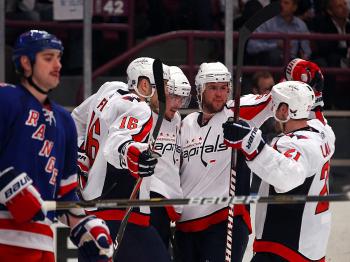 AT A LOSS: The Rangers now face elimination as they gear up for Game 5 on Saturday. (Bruce Bennett/Getty Images)
Hockey

By Drew Carlucci
Print
After leading by three goals after two periods, the New York Rangers let momentum slip away and were handed a heartbreaking 4–3 loss in double overtime to the Washington Capitals in Game 4 on Wednesday night at Madison Square Garden.

On the play, Marian Gaborik tried to clear the puck away from Rangers' goalie Henrik Lundqvist but Caps' Winger Jason Chimera positioned himself in front of the net, blocked the clearing attempt and poked the puck in for the scoring goal at 12:36—and the entire crowd at MSG went dead silent.

The Rangers now face the daunting task of heading back to the Verizon Center (home ice of the Capitals) down 3–1 and facing an elimination game.

If there are any silver linings, a case could be made that the Rangers manhandled the Caps for two periods by creating plenty of zone pressure—particularly in the second period when they scored three goals. If they can bring that same effort into Game 5, they could have a chance to even the series.

Lundqvist, who made 52 saves in the loss, spoke with MSG after the game, "It's real tough right now. We tried to regroup after the third period, but it's so frustrating to end this way."

But the Rangers' netminder knows his team needs to get back on track, "Right now it's painful, frustrating, and disappointing. But tomorrow, we have to move on. We're down 3-1 but it's not impossible. We just have to regroup and forget about it. We don’t have any choice", he said.

Rangers' center Brandon Dubinksy added, "We just have to find a way to get it done."

After a scoreless first period, the Rangers struck first at 5:24 in the second as Artem Anisimov skated around the back of the net and threw a shot on goal that bounced off of a Caps defenseman and past goalie Michal Neuvirth who was unable to stop the puck.

The Rangers struck again at 13:40. Ruslan Fedotenko made a great play as he circled the net and put a crisp pass onto the stick of Marian Gaborik who slapped it past Neuvirth on his left side.

Brandon Dubinksy then scored another goal for New York as he got his own rebound and whipped a hard shot past Neuvirth at 13:47.

With two goals in seven seconds, and the Rangers up 3–0, the entire Garden exploded into absolute bedlam.

Dubinsky commented on the scoring flurry in the second period, “We came out with good energy. We’re playing aggressively like we always do and got rewarded.”

But just as hot as the Rangers were in the second, they seemed to play it a bit too conservatively in the third and Washington took full advantage of the situation—scoring at 2:47, an unassisted goal by Alexander Semin who put a hard shot on goal that trickled past Lundqvist.

Washington's Marcus Johansson helped make it a 3–2 game after he put away a deflected shot by teammate Brooks Laich.

Johansson got the tying goal—his second of the game—as he deflected yet another puck past Lundqvist at 12:07, taking a shot by teammate John Carlson who ripped it from the top of the left circle.

After one full scoreless period of overtime and half of another, the crushing goal came at 12:36 by the Caps' Jason Chimera and the game was over.

Game 5 will be on Saturday.