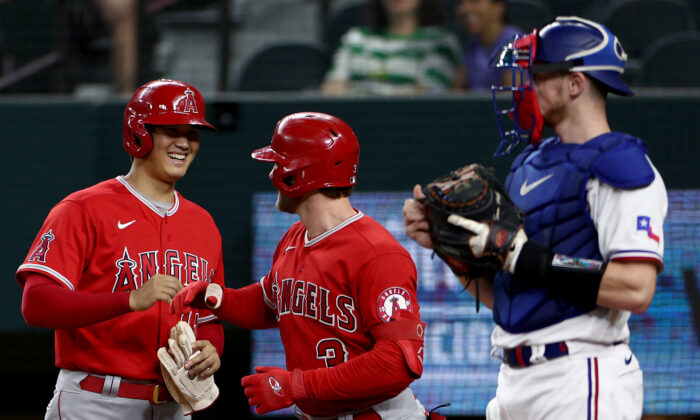 Rangers Bounce Back to Defeat Angels

Adolis Garcia drove in two runs and Josh H. Smith launched a home run and had two RBIs on Wednesday, Sept. 21, to help power the Texas Rangers to a 7–2 win over the Los Angeles Angels in Arlington, Texas.

Leody Taveras provided some insurance with a two-run single in the eighth inning, and the Rangers (64–84) bounced back after losing the series opener on Tuesday to the Angels (65–84).

Shohei Ohtani kept the inning alive with a two-out single, and Ward’s homer was his 19th.

Texas chipped back with a run in the first. Corey Seager singled and moved to third on Nathaniel Lowe’s single. Garcia’s sacrifice fly made it, 2–1.

In the second inning, the Rangers tied it at 2 on Smith’s fielder’s choice grounder. Taveras started things off with a single, and after advancing to third on a wild pitch, Smith grounded to shortstop.

The Angels had the infield in, and Livan Soto’s throw home was low, and skipped past catcher, Matt Thaiss. Taveras scored on a head-first slide. Smith advanced to second on the error.

The Rangers claimed the lead for good, 3–2, in the third inning on doubles by Nathaniel Lowe and Garcia.

The Angels had a chance to get something started in the seventh inning. Ohtani led off with an infield single.

But a potential threat was quickly erased as Ward’s sharp comeback liner was snared by reliever Brock Burke, who doubled Ohtani off first for a double play.

Texas made it 4–2 on Smith’s second MLB homer, which came with two outs in the seventh inning off Jaime Barria.

The Angels tacked on three runs in the eighth inning on Taveras’ two-run single with the bases loaded. A third run scored on an error.