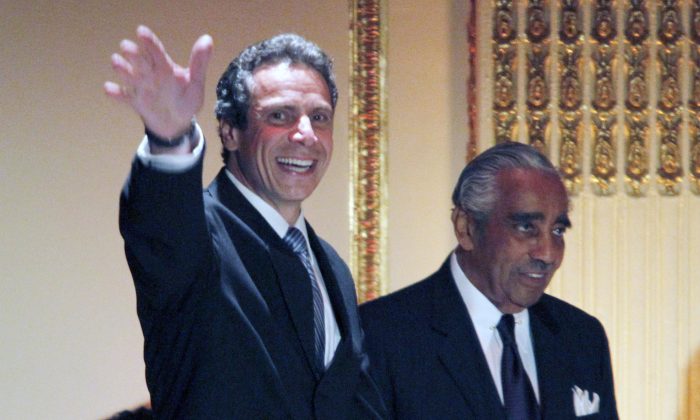 “Charlie Rangel has fought for the people of his district for over 40 years,” Cuomo said in a statement, “His experience, seniority, and steadfast commitment to improving the lives of New Yorkers continue to make him a critical voice in standing up to the tea party extremism that is threatening to take over Washington.”

Cuomo had previously endorsed Rangel in the 2012 primary. In the last primary, his endorsement came four days before the election; this year, it was two.

“Adriano Espaillat was 1,000 votes away from unseating Congressman Rangel in 2012 as an insurgent with no political support. Two years later, the call for change is even louder,” said Espaillat’s campaign manager Jesse Campoamor, responding to Cuomo’s endorsement.

Espaillat was also endorsed by the New York Times Editorial Board on Wednesday.

Campoamor also dismissed the NY1/Siena College poll, saying that the race will be determined by voter turnout.

“This election will be decided on turnout—while Adriano’s supporters are fired up, Congressman Rangel no longer has the advantage on labor support or financial resources to help him get out the vote,” he said of the poll, which had surveyed 707 potential voters from June 14 to 18.

In the 2012 Democratic primary for New York’s 13th Congressional District, only 14 percent of registered party voters cast their ballots, 18,940 for Rangel and 17,950 for Espaillat.

The results of the 2012 primary were close enough that Espaillat had petitioned for a recount.

The Espaillat campaign also questioned the survey’s methodology, saying that Hispanic voters were not properly represented in the poll.

Both candidates have intensified their campaigning as Election Day draws closer. Rangel held a rally on Lenox Avenue that was promoted as a “flash mob dance party” on Saturday and visited Harlem churches Sunday morning.

Meanwhile, Espaillat marched through upper Manhattan with a caravan consisting of an estimated 60 cars and 400 supports on Saturday. He campaigned in East Harlem Sunday, talking to locals, visiting small shops, and performing card tricks for families in the park.

The primary is Tuesday, June 24.