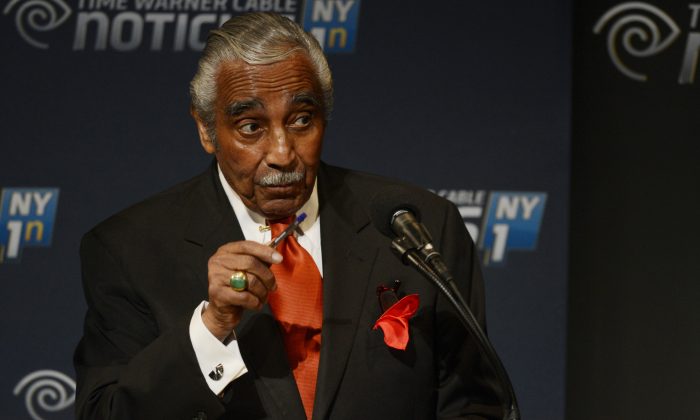 NEW YORK—One of the longest-serving members of Congress, U.S. Rep. Charles Rangel, is in a fight just to hang on to his seat and days from a too-close-to-call primary, but the race’s potential kingmaker—a former Rangel ally—is remaining conspicuously silent.

That man, New York City Mayor Bill de Blasio, ran Rangel’s 1994 campaign and polls extraordinarily well with black and Latino voters who compose the majority of the district Rangel has represented for 44 years.

But de Blasio, a fellow Democrat, has decided to stay out of the race and has chided Rangel, the last of Harlem’s traditional African-American powerbrokers, for repeatedly invoking the ethnicity of his opponent, Adriano Espaillat, a Dominican-American state senator.

“Just what the heck has he actually done besides saying he’s a Dominican?” asked Rangel in a debate this month. He claimed Espaillat was solely running to be the “Jackie Robinson of the Dominicans in Congress.”

Rangel also charged that Espaillat put out campaign literature during their first race two years ago that accused a Dominican of being a traitor for supporting Rangel. Espaillat later acknowledged that the flier was an example of both campaigns engaging in tactics that were “not exactly the right thing to say.”

The candidates’ invocations of race are telling, as the changing demographics of Rangel’s district is one of the chief factors for why a man known as the “Lion of Harlem” is struggling to remain the voice in Congress of one of the nation’s great black neighborhoods.

But his district was redrawn in 2011 and now includes a portion of the Bronx, which means Latinos have replaced some of his African-American base.

“It’s a very different district than it used to be,” said Christina Greer, political science professor at Fordham University. “Rangel is very crafty, but some of the old ways don’t work.”

De Blasio has urged the candidates to focus on issues ahead of Tuesday’s primary in the largely Democratic district.

“I don’t think the people will smile on any discussion of anything but the issues,” a visibly annoyed de Blasio said last week.

The mayor said he subsequently heard from Rangel, who assured him that he would be “cautious with word choice going forward.”

Instead of being cautious, though, Rangel doubled down, telling an interviewer that his comments “had to be said.” That infuriated de Blasio and furthered his resolve not to support Rangel, according to a member of the mayor’s inner circle who wasn’t authorized to discuss a private conversation and spoke on condition of anonymity.

Rangel’s hold on his seat began to look shakier in 2010, when a series of ethics violations forced him to resign his post as chairman of the powerful Ways and Means Committee. He received a sanction of censure from the House and the calls to replace him grew louder. He was re-elected that year but with a much smaller margin of victory, and in 2012, he beat Espaillat by fewer than 1,000 votes.

Tuesday’s primary also looks to be tight; a poll released late last month had Rangel with a slim lead, and two other lesser-known candidates—one black, one Latino—could siphon votes from both men.

In an effort to shore up his at-times wobbly campaign, Rangel landed endorsements from Sens. Charles Schumer and Kirsten Gillibrand as well as former President Bill Clinton. New York Gov. Andrew Cuomo has yet to make an endorsement but he backed Rangel at the eleventh hour two years ago. The Rev. Al Sharpton has declined to support a candidate.

De Blasio’s backing would likely carry the most weight. In a poll released last week, de Blasio received a 66 percent approval rating from black voters and 56 percent from Hispanic voters. The mayor, who is white, won widespread support from the communities in his landslide win in November and his wife, who is black, and their children were prominently featured in his campaign.

But Rangel’s aggressive courtship of de Blasio—the congressman told the media he tried to call him several times—has gone nowhere. A campaign adviser declined to address the snub.