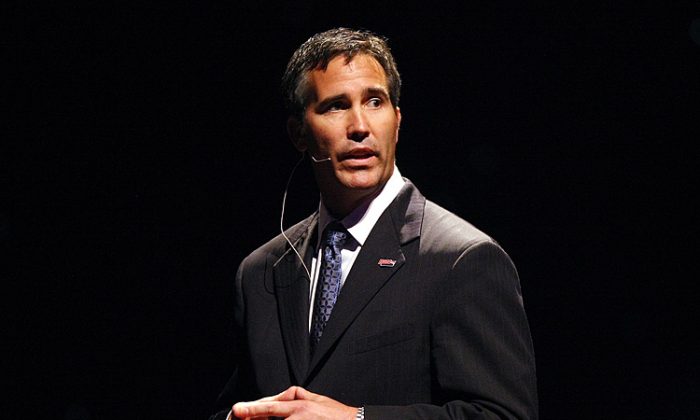 IndyCar CEO Randy Bernard has been released from his five-year contract (2010–2014) by the board of directors of the Indianapolis motor Spe3edway Corporation, effective immediately.

“Both parties agree that it’s time to move forward separately, it’s an amicable separation and Randy is going to stay on in an advisory capacity,” IMS President and Hulman & Co, CEO Jeff Belskus told AP.

Bernard had done much to reverse the fortunes of the ailing series, but met resistance from some of the team owners, who wanted more control for themselves.

When he accepted the job in 2010 Bernard took over control of a series which had lost tens of millions of dollars per year for the past fifteen years, had alienated most fans and sponsors, and which was not wanted by most television networks. The series was using a seven-year-old chassis and had only one engine supplier.

Bernard pushed through the development of a new chassis and attracted Chevrolet as a second engine supplier. The new car improved the racing tremendously, and fans loved the competition between engine suppliers.

Bernard also brought in a new race director and worked hard to include more oval tracks on the schedule—all things for which fans had clamored.

2012 was unquestionably the best season of IndyCar racing of the past several years, and fans were looking forward eagerly to 2013.

Team owners, some of which had run—and ruined—IndyCar splinter series called CART and ChampCar, were unhappy with some of Bernard’s decisions, and sought more control over the direction the series might take. Despite having already proved incapable of running the series, groups of owners lobbied to have Bernard removed.

It is widely believed that Tony George, who recently resigned from the IMS board because of a conflict of interest case involving an attempt to purchase IndyCar, is allied with the owners.

George started the Indy Racing League in the mid-90s, a move which split the teams, sponsors, and fan base and led to the eventually near-collapse of IndyCar racing, which had been the premier form of motorsports in North America.

In 2009 the board fired George as CEO of IndyCar after he spent tens of millions per year to keep his unprofitable and unpopular series alive; Bernard was hired to right the ship and restore profitability, which he nearly did in 2012 and likely would have done before the end of his tenure.

Bernard will stay on in an advisory capacity while Jeff Belskus acts as interim CEO. A search for a new CEO will start Monday.

The sudden shift in top-level management is probably the worst thing IndyCar could have done at this juncture, when it is trying to prove that the series is a stable and worthwhile investment opportunity.