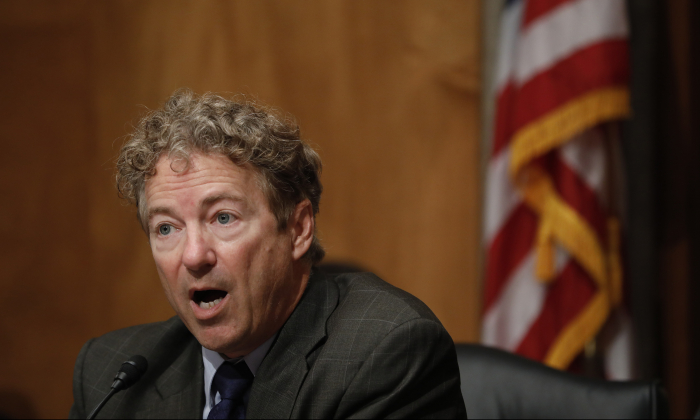 Rand Paul Defends Trump Amid Backlash Over Summit With Putin

Paul (R-Ky.) is among only a handful of Republican lawmakers who side with the president, amid an avalanche of negative news coverage and criticism from both sides of the aisle. A staunch advocate of nonintervention, Paul told CBS’s “This Morning” that meeting with foreign adversaries should be “lauded and not belittled.”

“Every Democrat on Capitol Hill objected to him meeting with Putin. Every neoconservative and warmonger on the right also objected to it. So yes, the vast majority of the foreign policy community, the bipartisan consensus said, ‘You shouldn’t meet with Putin,'” Paul said.

“They also said he shouldn’t meet with Kim, and this is an extraordinary thing about President Trump that should be lauded and not belittled … that he is willing to meet with adversaries to try to prevent us from having World War III.”

Democrats and Republicans on Capitol Hill, former Obama administration officials, and major media outlets have criticized Trump after the July 16 summit for not publicly admonishing Putin for allegedly interfering with the 2016 election.

Some of the criticism of Trump’s meeting with Putin focuses on Russia’s poor record on human rights and press freedom, as well as Putin’s image as an autocrat. Paul waved that notion aside and pointed out that the United States maintained a direct line with the Soviet Union during the height of the Cold War and “the world is a safer and a much better place because we had that line of communication.”

“I think the president did a good thing by meeting with Putin, and I think it’s a mistake for people to try to turn this into a partisan escapade.”

At the summit with Putin, Trump said that he had great confidence in his intelligence people, but that Putin “was extremely strong and powerful in his denial.” The president also pointed to three crucial pieces of evidence concerning the alleged Russian hacking: the Hillary Clinton email server, the Democratic National Committee (DNC) server, and the House Democratic Caucus server maintained by Imran Awan, a fired congressional aide.

Three days before the summit, special counsel Robert Mueller filed an indictment accusing 12 Russian intelligence officers of hacking Democratic computer systems, including the DNC server. The indictment alleges that the Russians stole emails and disseminated them in order to sow discord during the 2016 election.

Trump likely pointed to the DNC server to substantiate his doubt about Mueller’s indictment and the intelligence community’s assessment. In the hacking case, the DNC server is the proverbial scene of the crime, but the DNC has denied investigators access to the server. Former FBI Director James Comey told the Senate in June last year that the DNC had refused to give the FBI access to the server, despite multiple requests.

Mueller was tasked last year with investigating allegations of Russian interference in the 2016 election and whether any member of the Trump campaign colluded with Moscow. To date, Mueller has produced no evidence or indictments related to collusion. The special counsel did charge a total of 25 Russian with crimes related to meddling in the election.

Paul made a distinction between meddling and collusion. The senator said that the collusion allegations are based on a partisan investigation started by Clinton loyalists at the behest of her campaign. The core evidence of collusion is a dossier, which was compiled by a former British spy and paid for by the Clinton campaign and the DNC. The ex-spy, Christopher Steele, used sources with close ties to the Kremlin to compile the dossier.

The claims within the document have not been substantiated after intense investigations by the intelligence community, Congress, and the media.

Partisans in the intelligence community used the dossier to spin a collusion narrative and start a counterintelligence probe into the Trump campaign. The FBI used the dossier to obtain a warrant to spy on campaign volunteer Carter Page. Several officials involved in applying for the warrant have been referred for criminal investigation.

“There is a legitimate aspect and a partisan aspect. And we all have now concluded and now understand that the investigation was started by partisans—James Clapper, John Brennan—who started the investigation at the behest of the Clinton campaign who paid somebody in Russia to come up with a dossier,” Paul said.

“So really it’s funny that we keep talking about Trump and Russia when in fact the only person actually known to pay Russian agents was Hillary Clinton, who paid a British spy who then paid British agents for concocted dirt on Trump.”

Paul was among a handful of Republicans to defend Trump on the heels of the summit. Sen. Ron Johnson (R-Wis.), Sen. John Cornyn (R-Texas), and Sen. John Barrasso (R-Wyo.) also supported the president.

A group of Republican senators visited Russia on July 4. Paul is also planning a trip, to foster cultural exchange and promote more visits by lawmakers to Russia.