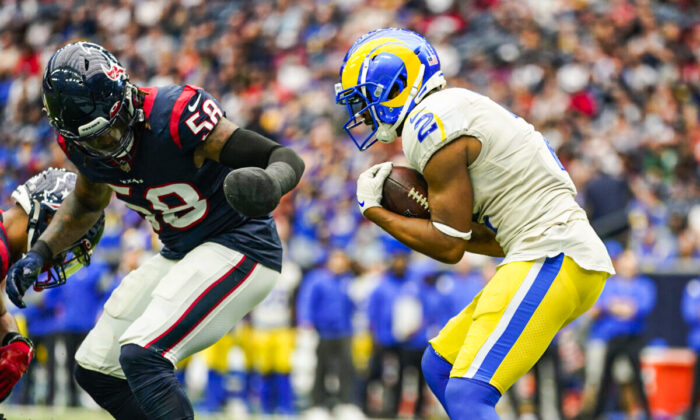 THOUSAND OAKS, Calif.—On the same day the Los Angeles Rams added a playmaking receiver, they lost a cornerstone of their NFL-best passing offense.

And they’ve only got two days to figure out how to overcome this upheaval in their next game.

Receiver Robert Woods is out for the season after tearing a knee ligament in practice, coach Sean McVay confirmed Saturday.

“You’re sick for Robert,” McVay said. “He’s epitomized everything that’s been right about this place. Such a great competitor. Such a tough competitor. It’s so unfortunate.”

Earlier Friday, Odell Beckham Jr. reported to the Rams’ training complex and signed his contract after Los Angeles landed him as a free agent.

Beckham joined practice Saturday on his first full day with the Rams (7–2), and the former Giants and Browns star could play Monday night at San Francisco, McVay confirmed.

“There’s a chance,” McVay said. “You can see he’s a really sharp guy. Like the look in his eye, and we’ll see how he’s feeling, and we’ll see what that looks like as far as how we’re able to utilize him if he’s able to go.”

Los Angeles leads the league in passing offense with new quarterback Matthew Stafford, and Woods is a vital component of that success alongside NFL receiving leader Cooper Kupp and fellow starter Van Jefferson. Contributing as a receiver, a blocker, and an occasional jet-sweep runner, Woods is second on the roster with 45 catches for 556 yards and four touchdowns while also rushing eight times for 46 yards and another TD.

A team captain, Woods also has been a model of durability in his NFL career, never missing more than three games in a season due to injury.

McVay joined the Rams in the same offseason as Woods and left tackle Andrew Whitworth, and the two players have been foundational contributors to the offensive-minded coach’s success.

“I think these are probably the worst moments that you go through,” McVay said. “When you see somebody that you love and care about so much go through some adversity on something that’s just such a freak accident.”

The Rams pursued and signed Beckham earlier this week because they were already thin at receiver. DeSean Jackson demanded to leave Los Angeles last month after being disappointed in his lack of playing time, and rookies Tutu Atwell and Jacob Harris are out for the season with knee injuries.

With Woods also unavailable to an offense that has run three-receiver sets almost exclusively, the Rams’ depth chart at receiver now consists of Kupp, Jefferson, Beckham—followed by rookie Ben Skowronek, who has taken nearly all of his 37 offensive snaps in garbage time this season, or J.J. Koski, who was promoted from the practice squad last week.

That means the Rams will face the 49ers with a third receiver on the field who has little or no game experience with this offense.

If the prospect worries McVay, he isn’t saying so.

“You always have to be able to pivot,” McVay said. “You’ve got to have agility and flexibility based on uncertain scenarios. This is certainly one that you didn’t expect, and it happens a little bit later in the week of preparation. Makes it a challenge, but whatever I say is going to be an excuse.”

Woods played four seasons in Buffalo before the Southern California product returned to his hometown with the Rams in 2017. Early last season, Woods agreed to a four-year, $65 million contract extension that begins in 2022.