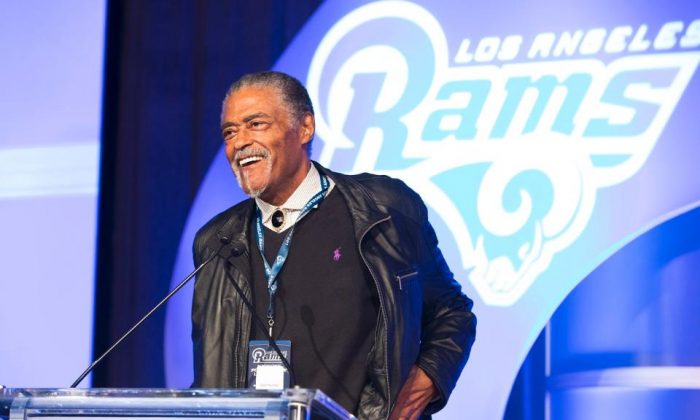 84 year-old Roosevelt Grier, a member of the fabled Fearsome Foursome, and now an ordained minister, gives the invocation at the Kick Off for Charity Luncheon, hosted by the Los Angeles rams Charitable Foundation. (Ric Tapia/LA Rams Foundation)
NFL

Rams Kick Off for Charity Luncheon

Coming back to Los Angeles after a 22-year hiatus, the National Football League’s Los Angelees Rams mean business. To stay in business this go-round means etching the Rams’ brand in the community. In order to get back, as the ageless truism goes, they need to give.

The football franchise’s Charitable Foundation welcomed the NFL’s opening weekend with a “Kickoff for Charity” luncheon and silent auction at the Westin Bonaventure Hotel in Downtown Los Angeles. Hosted by KCBS sports anchor Jim Hill, the event attracted nearly 200 attendees, mostly season-ticket holders and corporate patrons, who paid upwards to $10,000 a table for the honor to be seated among heroes of the gridiron in the name of supporting social causes.

Official banking partner of the Foundation, Banc of California, sponsored the event. Steven Sugarman, its chairman and chief executive officer, spoke of the challenges for the Rams in the multi-cultural, multi-linguistic backdrop of Los Angeles.

“The Los Angeles Rams Foundation is uniquely able to engage California’s diverse communities of at-risk youth to improve their education, their wellness and their access to opportunity,” he remarked.

The Foundation will also enable 800 youth to attend Rams games at the Colleseum.

Prominent figures in the Rams organization included Head Coach Jeff Fisher, General Manager Les Snead, and Chief Operating Officer Kevin Demoff, who joined a few Rams legends at the event. Of note was Roosevelt Grier, who led the Fearsome Foursome defensive line of the Rams in the 1960s.

The sole survivor of that fabled front, Mr. Grier attained notoriety for non-traditional male hobbies needlepoint and macramé. The 84-year-old, also an actor, singer, and ordained Christian minister, performed the invocation with aplomb, passion, and energy, in contrast to the frail image a cane in his hand might have suggested.

Mr. Hill introduced Rams players, scattered about, who stood as their names were called. The sight of high-fives and looks of adulation among seated guests were remindful of John Moffitt, an NFL guard for the Denver Broncos, who quit the game midway in 2014 season.

“It freaks me out to have grown men that you look up to act completely different around you now because you’re in the NFL,” he commented to Sam Farmer of the Los Angeles Times. Nevertheless, the focus of this luncheon was to raise money for charity, and these were the ones to fork over the cash.

The noon-time event included Rams cheerleaders, called “Rampages,” who circulated with raffle tickets and for photo opportunities. A display of donated, autographed items for silent auction included an autographed Terry Bradshaw helmet, a Willie Nelson guitar, and a Rams helmet worn by Eric Dickerson, who eclipsed the NFL rushing record in 1984. Bids were non-existent, however.

Not so with the live auction inside, where bidding was brisk for Opening Day pre-game field passes, a field suite for up to 34 guests, a game-worn jersey, Super Bowl LI tickets, and the chance to travel with the Rams on the team plane for the December 4 game at the New England Patriots. Winning bids ranged from $5,000 to $15,000.

If there was a damper on the fundraising event, it could have been that food prepared but not served was to be discarded, according to an employee at the Westin Bonaventure who asked that his name not be used. “I see so much food going into the trash, I cry,” he said.

Mr. Hill interviewed Rams Coach Fisher, who himself was returning to Los Angeles after an absence of 25 years due to coaching in other NFL cities including the Rams in St. Louis. He graduated from Taft High school in the San Fernando Valley and the University of Southern California, where he played defensive back.

Mr. Fisher displayed the eternal optimism almost expected from a coach. The 2016 Rams would be “relentless and determined,” he said, to applause. “When you come up against us, you’re not gonna feel good the next day.”

The Rams’ return to the same locale it left 22 years ago is not without skepticism, which the Rams Charitable Foundation is tasked to help placate. Sagging attendance, a reason for the Rams departure, was attributed to the abundant diversity in Los Angeles, the nation’s second-largest media market, which offers competing choices in how to spend a Sunday afternoon. And multi-linguistic and multicultural demographics may suggest soccer is the preferred sport.

The upshot is that building playgrounds and providing opportunities for underprivileged children may be just one cog in marketing the Los Angeles Rams. The rollout of a new product, which the Los Angeles Rams is, suggests etching its brand in the communities. In a place as diversified as Los Angeles, making the Rams viable, an indirect role of the Foundation, may be a barometer of how the sport might fare in the NFL’s stated goal of global expansion. In addition to present NFL games in London, the Rams will play a “home” game in China, in 2018.