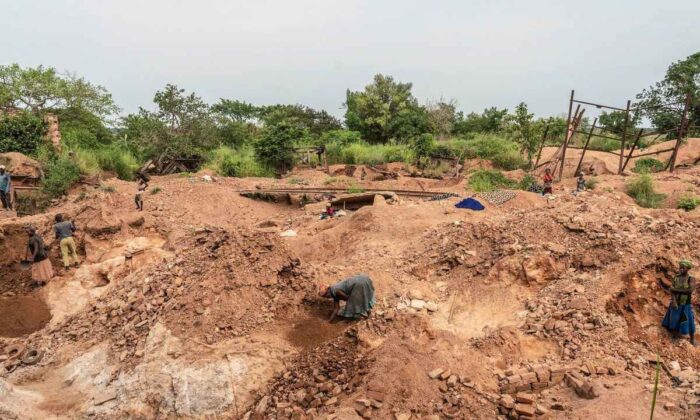 The AVZ lithium mine in the Manono region of the Democratic Republic of Congo, Africa. (Junior Kannah/AFP via Getty Images)
China Business & Economy

Due to the limited supply of domestic lithium resources, battery-related companies in China have stepped up their competition for outside lithium sources.

Responding to a tweet on July 13 saying there is no security without energy independence, Tesla CEO Elon Musk wrote, “Absolutely. And lithium batteries are the new oil.”

The production of this “new oil” is inseparable from lithium ore resources. In recent years, Chinese companies have stepped up the acquisition of lithium mines around the world, and thereby expanded their control over the upstream resources of the electric vehicle (EV) industry chain.

On July 11 , China’s Ganfeng Lithium announced that it would acquire a 100 percent stake in Argentina’s mining group Lithea for $962 million. Lithea is mainly engaged in the acquisition, exploration, and development of lithium mines. The company owns two salt lake assets, Pozuelos and Pastos Grandes, also known as the PPG lithium project, in the mineral-rich Salta province of Argentina.

The PPG project uses lithium-containing salt lake brine to produce lithium carbonate, a key material in EV batteries. The two assets can provide roughly 11.06 million tons of lithium carbonate, with a projected first-phase annual production of 30,000 tons, and the potential to expand to 50,000 tons per year in the future.

In the announcement, Ganfeng Lithium said that the transaction will help improve the company’s self-sufficiency in lithium resources and enhance the company’s core competitiveness.

According to its website, in addition to the latest PPG project, the company has four other lithium salt lake projects in Argentina. Moreover, it also owns three lithium mine projects in Australia, and has invested in a spodumene project in Mali and Ireland each, as well as a lithium clay project in Mexico. Spodumene is an ore from which lithium is extracted.

The United States Geological Survey (USGS) said in a report that as of 2021, the world’s uncovered lithium reserves are highly concentrated in Bolivia, Argentina, Chile, the United States, Australia, and China, with these six countries accounting for 80 percent of the world’s total lithium resources.

Bolivia, home to the world’s largest lithium resources, has recently become the center of the lithium race.

On June 8, Bolivia’s energy minister announced that foreign companies competing for the country’s huge lithium resources had been reduced from eight to six, and later confirmed that four of the remaining six companies were Chinese companies, including the world’s largest power battery production Shang Ningde Times, China’s Fusion Enertech, TBEA, and CITIC Guoan Group. The other two contenders are from Russia and the United States.

At the end of May this year, Chinese state media The Paper reported that BYD, the Chinese EV and EV battery giant, had reached acquisition agreements for six lithium mines in Africa.

BYD also obtained the right to extract 80,000 tons of lithium over 20 years in Chile in January. Another top Chinese lithium company, Tianqi Lithium, purchased a 23.77 percent stake in Chilean lithium giant Sociedad Química y Minera de Chile S.A. (NYSE:SQM) in December 2018 for about $4.2 billion with the support of a syndicate of funds led by China CITIC Bank. SQM has exclusive access to the world’s best and largest reserves of calcareous ore and brine underneath the Atacama Desert.

Nonetheless, after the new Chilean government came to power, it actively promoted the nationalization of mineral resources, posing uncertainties for BYD and Tianqi Lithium’s mining projects.