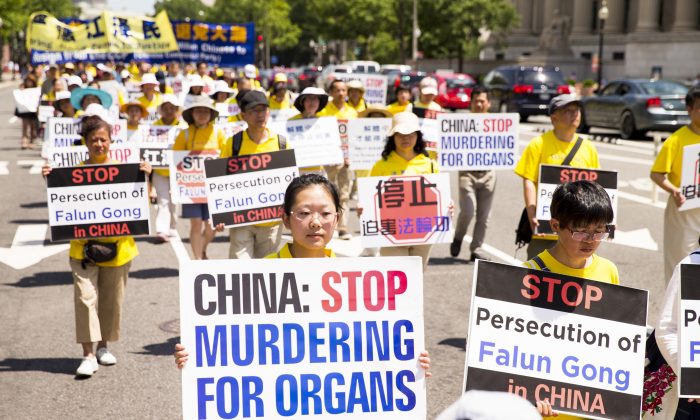 Falun Gong practitioners hold a march in Washington on July 14, calling for Jiang Zemin, the former dictator who instigated the persecution of Falun Gong in China, to be brought to justice. (Larry Dye/Epoch Times)
US

WASHINGTON—On July 14, hundreds gathered on the west lawn of the U.S. Capitol to raise awareness about and protest the Chinese communist regime’s violent persecution of a traditional meditation practice now in its 17th year.

Falun Gong is on the “front line against evil,” declared Rep. Dana Rohrabacher (R-Calif.), a long-term and vocal supporter of the practice in the face of repression.

“We have sent the message loud and clear to the Chinese Communist Party that we demand an immediate end to the persecution of the Falun Gong, that we demand that all jailed Falun Gong practitioners and other prisoners of conscience be released, and that we call on China to immediately stop its inhumane and unethical practice of organ harvesting,” said Congresswoman Ileana Ros-Lehtinen (R-Fla.), who introduced into the House of Representatives a resolution censuring forced organ harvesting in China, which unanimously passed on June 13.

At the rally, practitioners of Falun Gong wore their characteristic yellow and blue clothes while holding banners in support of their faith. Some from mainland China had suffered horrendous torture at the hands of the Chinese authorities.

Apart from prominent congressional representatives, other speakers at the annual event included representatives of human rights organizations and NGOs.

“America was founded by those committed to ensuring religious liberty,” said Mark P. Lagon, president of the Freedom House. “Our leaders, government, and civil society must hold our major trade partners and other countries to the same standards.”

Falun Gong (also known as Falun Dafa) is a Chinese spiritual practice that combines qigong exercises with teachings based on the principles of truthfulness, compassion, and tolerance. By orders of then-Communist Party head Jiang Zemin, in July 1999 Chinese security forces launched a methodical campaign of mass arrests and widespread propaganda against the practice and the estimated 70 million Chinese who had taken it up.

Tina Mufford, an analyst working for the U.S. Commission on International Religious Freedom, condemned the Chinese regime as “one of the most barbaric violators of religious rights.”

She and other speakers called for the international community to take heed of the forced organ harvesting industry that has allowed Chinese hospitals to profit from the wholesale slaughter of Falun Gong practitioners and other prisoners of conscience for their organs.

The speakers made reference to an investigation published in June, nearly 700 pages in length, that estimates that as many as 1.5 million transplants were performed from 2000 until recently, with practitioners of Falun Gong believed to be the primary source of organs.

The resolution passed by the House of Representatives in June expressed “concern regarding persistent and credible reports of systematic, state-sanctioned organ harvesting from non-consenting prisoners of conscience in the People’s Republic of China.”

Passersby at Capitol Hill, upon encountering the rally, expressed interest and empathy with Falun Gong and a resonance with the importance of human rights in China.

Maria, a D.C. resident who works at a catering company, said it was her first time seeing a Falun Gong rally in her city. She was appalled to hear what was happening to Falun Gong practitioners in communist China.

“That is your own country, your home, your everything is there,” she told Epoch Times. “And even worse, when you are not doing anything wrong, they come to kill you or put you in jail for just being a peaceful person, for just promoting compassion?”

Maxwell Bellido, an engineer visiting from Colombia with his wife, said, “To persecute these compassionate and peaceful people is insane.”

Millions who still practice Falun Gong in mainland China maintain a volunteer campaign of nonviolent disobedience, raising awareness about their nearly two decades of brutal treatment at the hands of the regime, as well as the political violence carried out by the Party over the decades of its rule.

An initiative made possible by a legal reform passed in May 2015 has seen hundreds of thousands of Chinese submit criminal complaints to China’s highest judiciaries—the Supreme People’s Court and Procuratorate—demanding the trial for crimes against humanity of Jiang Zemin, the former leader personally responsible for the persecution of Falun Gong.

One of those who has filed a criminal complaint against Jiang is Yang Xiaoping, a Falun Gong practitioner from Shanghai who was held in a labor camp and in extra-legal “black jails” for years.

Yang submitted a criminal complaint against Jiang Zemin in his own name, as well as one written by his wife. His complaint, which runs to over 20,000 characters, assesses and provides evidence for the leader’s role in specific policy actions that violated the Chinese legal code.

“It is clear that Jiang Zemin had the clear criminal intent to use torture to violently transform the minds of Falun Gong practitioners,” the document states.

Jiang Gaixin, a Chinese-American Falun Gong practitioner, was also suing Jiang, because “in this entire policy of persecution, he’s the main culprit.”