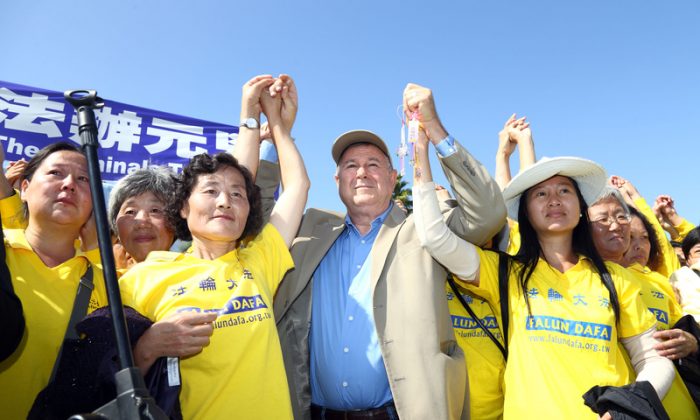 Congressman Dana Rohrabacher holds hands with Falun Gong practitioners during a rally calling for an end to the persecution to Falun Gong in China, at Long Beach in Los Angeles on Oct. 20. (Song Xianglong/Epoch Times)
International

Rally of 3,000 in Los Angeles Calls for End to Persecution of Falun Gong

A crowd from around the world, estimated at around 3,000 by organizers, gathered in Long Beach, Los Angeles on Oct. 20, calling for an end to the persecution of Falun Gong, a Chinese spiritual practice.

Most of the participants were Falun Gong practitioners. Joining them were supporters like U.S. Congressman Dana Rohrabacher, the deputy mayor of Long Beach, and human rights representatives. Survivors of torture also spoke to the assembly, recounting their experiences in Chinese labor camps.

Congressman Dana Rohrabacher, for years an outspoken figure on human rights in China, said at the rally: “We have an obligation to stand up for other people who are suffering under tyrants’ heels.”

He added: “I see that with the Falun Gong, talking about those aspects of the human soul that will make us more tolerant and more forgiving and energetic towards helping others,” referring to the principles of truthfulness, compassion, and forbearance that Falun Gong teaches.

Wu Yingnian, a Falun Gong representative, said that 3,733 innocent practitioners are confirmed of having been killed in persecution, but that far many more, for which there is no current direct evidence, were also likely killed.

“The reason behind the persecution is that Falun Gong practitioners insist on freedom of faith and speech,” Wu said. “It’s a persecution of not only Falun Gong but also the Chinese people.”

Around a dozen Falun Gong practitioners spoke about their experience of being persecuted in China.

Niu Jinping from Beijing was one of them. He said he was tortured by more than 10 police at one time, who used electric batons to shock him all over his body, including in his anus. “My whole body was burnt,” Niu said.

Some practitioners recounted how they were locked in mental hospitals and wrongly declared insane, forcibly injected with unknown medicines; some spoke about how they were sexually abused; and some said that they were pregnant and forced to have an abortion, or lost their babies due to torture.

After hearing these stories, Rep. Rohrabacher shed tears and took to the stage again to speak further — coming back to speak fully three times.

With reporting by Liu Feiluo.