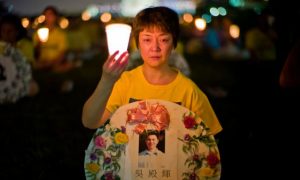 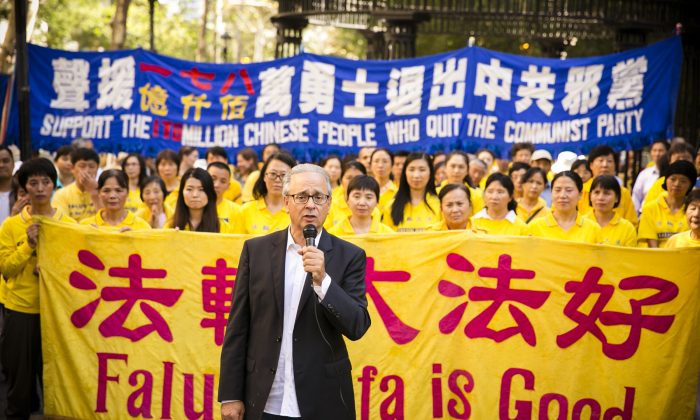 Alan Adler, executive director of Friends of Falun Gong, at a rally near the United Nations in New York on Sept. 27, 2014, calling for the end to the persecution in China. (Edward Dai/Epoch Times)
China

Rally Near UN Calls for End to Persecution of Falun Gong

NEW YORK—As the climax to five days of protests, Falun Gong practitioners from the greater New York area gathered together near the United Nations on Dag Hammerskjold Plaza on a sunny Saturday afternoon to hold a rally calling for an end to the persecution of their spiritual practice in China.

“Zhang was responsible for genocide, torture, and crimes against humanity in carrying out the persecution of Falun Gong,” said Tompkins. Saturday’s rally, Tompkins said, was to call for an end to the persecution being carried out in China by officials like Zhang.

Alan Adler, the executive director of the human rights organization Friends of Falun Gong, described that persecution as “a campaign of terror, imprisonment, lies, torture, and killing; a campaign of pure evil against a defenseless group of people who have no agenda or political aspirations.”

Falun Gong involves doing gentle, meditative exercises and living according to the principles of truthfulness, compassion, and tolerance. Introduced in China in 1992 it spread rapidly. By 1999 100 million people had taken up the practice, according to media reports. In July of that year, the-then head of the Chinese Communist Party, Jiang Zemin, ordered a campaign to “eradicate” the practice.

Adler called upon “U.N. Secretary-General Ban Ki-moon and Human Rights Commissioner Prince Zeid bin Ra’ad, as well as all 193 member nations, to support an international investigation into the 15-year persecution and the gruesome organ harvesting.”

Dr. Damon Noto, spokesman for Doctors Against Forced Organ Harvesting, talked about the deadliest form the persecution of Falun Gong has taken: the forced harvesting of organs from living Falun Gong practitioners that Adler alluded to.

“The world will come to know what the medical community has known for years,” Noto said, “China is executing prisoners of conscience for their organs.”

Noto urged countries around the world to speak up and take a stand against this atrocity.

Dr. Wang Zhiyuan is the director of the World Organization to Investigate the Persecution of Falun Gong, an NGO whose purpose is stated in its name.

He began his speech by noting the world’s concern about ISIL, but then pointed out that the Chinese Communist Party was a more sinister terrorist group.

Wang described the organ harvesting taking place in China as using the entire machinery of the state, involving all 31 provinces and province-level cities and more than 200 hospitals, to carry out a campaign of genocide against Falun Gong practitioners.

Taylor professed his love for the Chinese people, but said, “The Chinese Communist Party makes me nauseated.”

According to Gregory, 600,000 copies were distributed in Hong Kong in the first week the Nine Commentaries was available.

At the end of the rally Tenzin Dolkar of Students for a Free Tibet turned to address the rows of Falun Gong practitioners dressed in their characteristic yellow t-shirts that were arrayed behind the speaker’s stand.

Dolkar said that the Chinese Communist Party wants every oppressed group in China, including the Tibetans and the Falun Gong practitioners, to be isolated from one another. She called upon all of those who suffer under the CCP to unite together in their opposition to it.