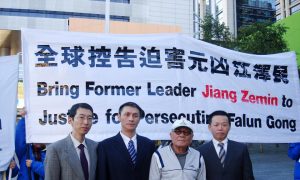 Rally in San Diego Calls for Justice for Persecuted

SAN DIEGO—Practitioners of Falun Gong and their supporters gathered at the scenic La Jolla Cove on the 16th anniversary of Chinese Communist Party’s severe suppression of the spiritual discipline to promote a recent movement to bring the chief perpetrator of the persecution to justice.

On July 20, 1999, then Communist Party leader Jiang Zemin launched a nationwide campaign to eradicate Falun Gong, a traditional Chinese meditation practice that involves slow, gentle exercises and adherence to the principles of truthfulness, compassion, and tolerance.

On Jiang’s command, security forces arrested scores of Falun Gong practitioners, breaking up families and creating many orphans. Over 3,800 practitioners were killed in the persecution, and hundreds of thousands more were tortured and abused in prison facilities, according to Minghui, a Falun Gong information website. Researchers have also found evidence to back allegations of forced organ harvesting of live Falun Gong adherents by Chinese state-run and military hospitals.

“The peaceful and steadfast resistance against the persecution has brought global awareness to the illegal treatment of Falun Gong practitioners and has resulted in more than 80,000 criminal complaints filed against the former head of the Chinese Communist Party who initiated these abuses, Jiang Zemin,” wrote California Senator Joel Anderson in a letter of support that was read at the rally. “I commend the bravery of those who are seeking justice in the face of oppression.”

Senator Anderson has worked closely with San Diego Falun Dafa Association since he was first elected in 2007. In 2008, Senator Anderson wrote to then Chinese leader Hu Jintao requesting the immediate release of Ma Jinhua, the mother of California resident Joanna Wang. Ma was detained for practicing Falun Gong.

“Today we come together to call for an end to the sixteen years of human rights violations in China against the believers of this spiritual movement… We will not give up this fight until every single practitioner is free from government persecution,” Anderson added in his letter.

San Diego resident Dr. Manuel Belandres, the initiator of a 2014 Virginia Medical Society Resolution that condemns the systematic, state-sanctioned organ harvesting in China, said in a speech at the rally: “We are put to task with the continuing objective of reaching out to all members of the administrative field and management… supporting and aiding each other, dedicated to ending the unethical behavior of organ harvesting in the mainland.”

Dr. Belandres, a retired trauma surgeon, first learned of the forced organ harvesting two years ago at Balboa Park and has since been calling attention to the issue in medical and governmental circles. He was a key organizer of the Medical Society of Virginia’s statement to condemn organ harvesting of Falun Gong. “Our coming together was a beginning, our keeping together is progress, and our working together will be our success,” he said, referring to joint efforts between the Falun Gong community and doctors to raise awareness about the abuses.

A candle light vigil was held after sunset. Under the flickering candlelight, many signed a petition to stop forced organ harvesting in China.