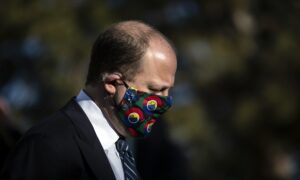 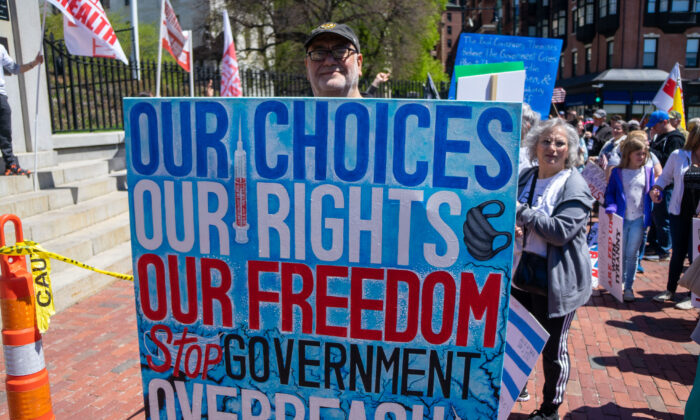 BOSTON, MASSACHUSETTS—Dr. Shiva Ayyadurai, entrepreneur and former U.S. Senate candidate, spoke to more than 1,000 people in a recent rally in front of the Massachusetts State House on Saturday.

His research reveals that prolonged use of face masks may increase the risk of oral and heart diseases. With some states easing COVID-19 pandemic restrictions, more and more people are standing up and calling for the lifting of more restrictions, especially removing the requirement to wear masks.

“Prolonged mask use increases the temperature and lowers pH in the mouth, thereby adversely affecting the oral microbiome leading to molecular pathways involved in periodontal disease that results in gum bleeding, bone deterioration, loss of teeth, and destruction of the oral immune system, as well as causing cardiac valve disease, and increased risk of stroke,” Ayyadurai said.

He said that working people should not rely on political parties, but need to act by themselves. “How do we win? We win by going back to what has worked before in history, a bottom-up movement. Let go of billionaires, let go of Kennedys, let go of Republicans, let go of Democrats. Build a movement from the bottom up. They don’t give a damn about you. I am telling you that right now. The people right next to you care about you.”

His slogan, “truth, freedom, and health,” was echoed by other speakers in the rally.

Sandi Garofano, a grandmother and an educator with 20 years of experience in early childhood education, said that masks may restrict children’s visual learning and hinder their emotional development.

“I have a granddaughter who will be turning a year old in July. I have to wear a mask around her. That was the only way I could see her. She refused to come to me. It tore me apart. She cried. She didn’t respond to my soft voice,” Garofano said in front of the crowd outside the State House.

Dr. Robin Frost, another speaker at the rally, said that truth, freedom, and health combine into a system in which freedom to move and communicate plays the key role.

“So if we can’t do that, we can’t get to the truth, … and without the truth, we don’t have our health, … without your health, you are restricted in your freedom. So it is a vicious cycle,” she said.

Recently, people in other states also took to the streets to oppose mask mandates, vaccine passports, and other restrictions.

Last Wednesday, thousands of parents protested outside the Connecticut State Capitol against a new bill eliminating religious vaccine exemption in schools. Local parents and organizations also filed a federal lawsuit against the bill, which was signed by Democrat Governor Ned Lamont on April 28.

On the same day, hundreds of people rallied in Augusta, Maine, to protest against business lockdown. Naomi Wolf, a famous author who attended the rally, said that such restrictions ruin people’s lives, but don’t have much effect in stopping the virus.

Last October, the World Health Organization’s Special Envoy on COVID-19 David Nabarro urged world leaders to stop using lockdowns as the primary control method. “Stop using lockdown as your primary control method, develop better systems for doing it, work together and learn from each other. But remember—lockdowns just have one consequence that you must never ever belittle, and that is making poor people an awful lot poorer,” he said.

Florida has taken the lead in lifting all of its COVID-19 restrictions, which could bring encouragement to protesters in other states.