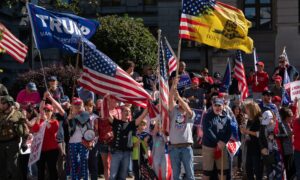 Trump supporters gathered for a “Stop the Steal” rally in Lansing, Michigan, on Saturday. Rally goers told NTD that they’re fed up with the legacy media.

Susan Runyon said, “I’m so disappointed. I feel that they just tell us what they want us to know. Everything fraud related, no, there’s no sign of it whatsoever. But no one’s saying, ‘well, there could possibly be.’ It’s just extremely one sided.”

Preston Runyon said, “Yeah, that’s pretty much how I feel. They’re borderline treasonists. They’re putting out dangerous stuff to the public that causes friction and tension, and kind of divides the country.”

Eric Koernke told NTD: “They’ve always been a little dishonest, mostly in framing of the use of language. Like they’re constantly using weasel words like, “some people” and stuff like that. There’s all kinds of different ways that they’re linguistically dishonest.”

Republican state senators have asked the state secretary for an election audit before the vote counts are formally certified.