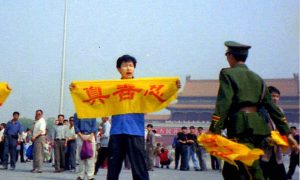 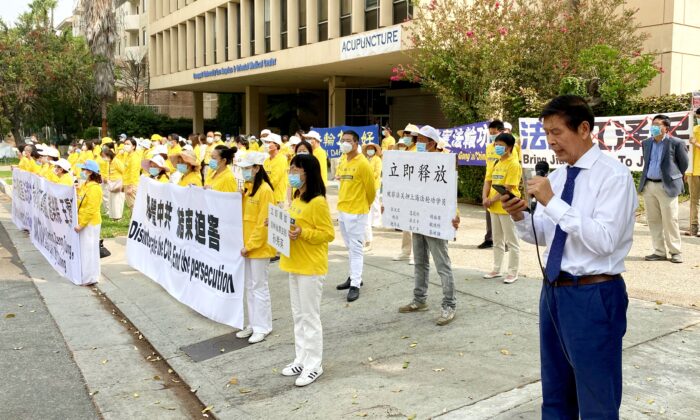 Practitioners of the spiritual discipline Falun Gong gather in front of the Chinese Consulate in Los Angeles to raise awareness of the persecution of Falun Gong in China, on Sept. 13, 2020. (Jack Bradley/The Epoch Times)
Southern California

LOS ANGELES—Practitioners of the spiritual discipline Falun Gong and their supporters gathered in front of the Chinese Consulate on Sept. 13 to call for an end to the Chinese Communist Party’s persecution of the practice, which has recently intensified.

In the first half of this year, 40 practitioners of Falun Gong, also known as Falun Dafa, died in China due to torture and mistreatment, according to Minghui.org, a website that documents the persecution. Many succumbed to long-term abuses in prison, and many were denied needed medical treatment.

More than 5,300 practitioners were targeted in the same time period, including those arrested for their faith and those whose homes were ransacked.

“Those are all innocent people,” Dr. Yingnian Wu, a professor at University of California–Los Angeles and a Falun Gong practitioner, said at the rally.

“So that’s why we’ve come here: to condemn the evil crimes of the communist regime. And at the same time, we ask the U.S. government and the governments of all civilized countries to stand up against the Chinese communist regime’s brutal persecution and bring those criminals to justice.”

Xian Jijun attended the rally and spoke of his friend, Jiang Quande, 66, who died on Aug. 26 as a result of persecution. Jiang’s wife, Sun Xiuying, was also arrested and is currently being held at a detention center in Nong’an County, Jilin Province.

“I was shocked and heartbroken to hear this,” Xian said of Jiang’s arrest and death. “I once stayed together with Mr. Jiang for about half a year. He was a very kindhearted and courageous person. He worked hard and selflessly to raise public awareness about the persecution of Falun Gong.

“I miss him dearly and highly respect him. I urge the Chinese authorities to release his wife and other Falun Gong practitioners.”

Wang Jing, another practitioner at the rally, spoke about her husband, Ren Haifei, who has recently been persecuted in China and may be in extremely poor health.

“[He] was brutally beaten after he was taken to the Ganjin street police station in Dalian City. His heart and kidneys consequently became very weak, and he was sent to the hospital for emergency treatment,” Wang said.

“We don’t know what his condition is. I’m extremely worried for his safety. I am also worried about other Falun Gong practitioners who were persecuted simply for their belief. I urge people to pay attention to this and demand that the Chinese regime release all detainees.”

The Chinese Communist Party (CCP) recently began a “zero-out” campaign, in which officials go to the homes of Falun Gong practitioners and demand they sign documents renouncing the spiritual discipline. Officials threaten to arrest them if they don’t, according to Minghui.

Some recent deaths that have been detailed by Minghui include those of Li Ling and Wang Fengchen.

Li’s family reported that she was taken into custody by a village official and a group of paramilitary soldiers in Dazhangjia Village, Penglai City, Shandong Province, on June 28, after a neighbor told authorities she possessed Falun Gong literature.

She was allegedly taken to an empty house where she was beaten and tortured for weeks, before dying on July 13. Her family said officials forced them to cremate her remains the same day.

Wang was a middle school teacher in Daqing City, Heilongjiang Province. He was arrested on Jan. 18, 2017, for being a Falun Gong practitioner. He had almost finished serving a four-year sentence at the time of his death on Aug. 9. While he had become critically ill in prison, his family’s application for medical parole, filed July 2, was reportedly rejected.

“Today, we are here to protest and condemn a new round of escalated persecution of Falun Gong in mainland China,” said Michael Ye, host of the rally in Los Angeles.

Ye said the Chinese regime persecutes Falun Gong because the spiritual practice “advocates the principles of truthfulness, compassion, and tolerance, and [because of] its independent thinking.”

“We know the Chinese Communist regime has been trying to control Chinese people, including their minds,” Ye told The Epoch Times.

Jiang reportedly said at the time, “Defame their reputations, bankrupt them financially, and destroy them physically.” He wanted the practice eradicated in three months.

After 21 years, Falun Gong continues to have a strong presence in China, and the persecution continues.

“If you speak out different from the government, you’ll be persecuted,” Ye said. “You may not be able to make a living, or you may even lose your life. And then outside of China, they basically try to use economic tools to try to keep every government silent. So they basically want every country to put their economic interests in front of human rights.”

The CCP has also been committing “a crime that has never been seen on this planet—the crime of forced organ harvesting from Falun Gong practitioners,” Dr. Youfu Li, president of the U.S. Southwestern Falun Dafa Association, said.

“The CCP is a mortal enemy that undermines the moral conscience of mankind and persecutes the traditional culture of China. We urge the U.S. government to designate the CCP as a transnational criminal organization and completely eliminate it,” Li said at the rally.

“We urge the U.S. government and other countries to work together to stop the CCP’s persecution of Falun Gong as soon as possible, and to pass bills to penalize and impose sanctions against major perpetrators, including Jiang Zemin.”

Dr. Dana Churchill, the U.S. West Coast delegate of Doctors Against Forced Organ Harvesting, said at the rally, “The Chinese Communist Party has been found guilty of state-sanctioned forced, illegal, live organ harvesting of the Falun Gong and other religious prisoners of conscience in China for the past 20 years.”

In June 2016, the U.S. House of Representatives passed its fifth resolution condemning China’s persecution of Falun Gong, calling for an end to the regime’s “eradication” campaign and forced organ harvesting.

“We want the world to know and want other governments to know that you have to get a lot tougher on the Chinese government—a lot tougher,” Churchill told The Epoch Times.