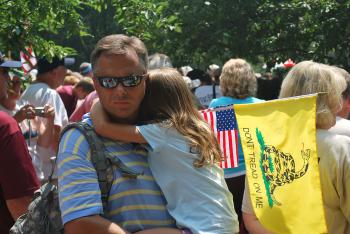 Man and child rally to 'Restore Honor' at the Washington Monument. (Ronny Dory/The Epoch Times)
US

Ronny Dorry
View profile
Follow
biggersmaller
Print
On the 47th anniversary of Dr. Martin Luther King Jr.’s historic March on Washington and the delivery of his “I Have a Dream Speech,” thousands of people gathered before the steps of the Lincoln Memorial on the National Mall in Washington, D.C., for the Restoring Honor Rally. The rally, organized by conservative radio and television talk show host Glenn Beck, featured speeches by Sarah Palin, and Alveda King, Dr. Martin Luther King Jr.’s niece. Also holding events on the National Mall were Reverend Al Sharpton and the National Action Network, who held the Reclaiming the Dream Rally (RDR) and March beginning at Dunbar High School. U.S. Education Secretary Arne Duncan and Martin Luther King III attended the RDR Rally.

“Over these grounds where we are so honored to stand today, we feel the spirit of Dr. Martin Luther King Jr. He who on this very day two score and seven years ago gave voice to a dream that would challenge us to honor the sacred charters of our liberty that all men are created equal,” said Palin, former governor of Alaska.

“We must as a people strengthen our spirit,” said Beck. Beck also spoke of a need for American’s to value and respect their families, be truthful, and be willing to make sacrifices for their children and future generations of Americans.

The audience, comprised of families and young and older, mostly white Americans applauded.

“Uncle Martin … had a servant’s heart. He marveled not at the awards he received for what he did.” said Alveda King.

“Today in more than one sense America is nearly bankrupt, or material gains are going the way of our moral losses … and the economy reflects the girth of our nation’s moral poverty, yet we are not without hope.“

Many traveled from different parts of the United States to attend the rally.

Susan Bayne, a family and marriage therapist from San Antonio, Texas, attended the rally because she felt that America was heading in a terrible direction. “There is a dislike of the general citizen, an elitist mentality,” said Bayne.

Nashville recording artist Kenny Thompson performed as members of the crowd walked to the base of the Washington Monument for a Tea Party rally held by Republican Congresswoman Michelle Bachman of Minnesota. Bachman rallied support for Tea Party backed congressional candidates, spoke critically of the president and Speaker of the House Nancy Pelosi, and spoke about the American values printed on U.S. currency.