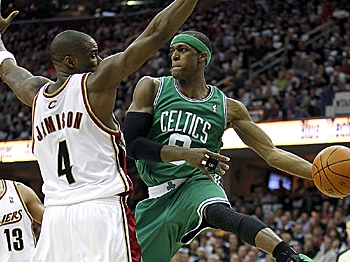 TAKING CHARGE: Rajon Rondo's leadership of the Boston Celtics was on clear display on Monday night with 13 points and 19 assists to lift Boston over Cleveland 104-86. (Gregory Shamus/Getty Images)
NBA

By Dan Pomerleau
Print
The Boston Celtics evened their Eastern Conference semifinal series against the Cleveland Cavaliers 2–2 at the TD Garden on Sunday with a 97–87 win and an MVP-caliber performance from Rajon Rondo.

It was a night-and-day difference from Friday’s game in Boston, where the Celtics suffered their worst home playoff loss in franchise history 124–95.

Rondo delivered one of the best playoff performances ever for the Celtics with a triple-double (29 points, 18 rebounds, 13 assists) in almost a playbook example on how to run the point guard position.

“He has complete control of the team,” Boston coach Doc Rivers said on Boston’s website http://www.nba.com/celtics/.“He was absolutely sensational tonight.”

LeBron James led the Cavs in scoring with 22 points, but that was only one point more than his first quarter performance on Friday.

James was clearly frustrated with his inability to connect—shooting 7–18 in field goals. He committed the most turnovers in the game with seven. It was another clear indication for Boston that if they can limit the King’s impact, the entire team will suffer.

Despite the win, Boston gave their fans quite a scare to start the game by quickly falling behind 7–0 in the first few minutes.

Ray Allen broke the ice for the Celtics with a 3-pointer and the team battled back to take their first lead of the game halfway through the first quarter off a three-point play from Paul Pierce. The Celtics never led in Friday’s debacle.

The Celtics looked like an entirely different team on the floor, hustling for the ball, setting smart picks and cutting, passing the ball, and attacking the basket. The team finished the quarter up 31–22 with 11 points from Rondo.

It was more of the same in the second quarter, with Rondo commanding the offense and attacking the basket to finish the half with 18 points, 8 rebounds, and 7 assists.

“My teammates were getting stops and that allowed me to use my speed and quickness to get to the lane,” Rondo said at the half.

Boston played aggressively and made good use of their fouls to stifle the Cavs’ energy at just the right moments. Unfortunately, that meant the playing time of Paul Pierce and Rasheed Wallace was limited.

Ray Allen and Kevin Garnett each had 12 first-half points and the Celtics led 54–45 going into the locker room.

Paul Pierce spent much of the third quarter on the bench in foul trouble and Boston got into a shooting funk at the end of the quarter. Cleveland briefly took the lead by two points before Boston finished the quarter up 74–72.

Boston dug deep and went on a 10–0 run to start the fourth quarter on the hot hand of reserve guard Tony Allen. Allen gave the team a huge burst of energy and dazzled the crowd with some acrobatic driving layups. He finished the night with 15 points.

“As long as we keep the supporting cast intact, I think we have a good chance at beating this team,” Kevin Garnett said after the game.

But Cleveland would go on their own 10–0 run later in the quarter to pull within two points with four minutes to go.

Boston wanted it more down the stretch and everything fell their way.

Shaquille O’Neal had 17 points—more than in any game in this postseason—but the big man only pulled down 5 rebounds in 28 minutes of playing time.

Now Boston is guaranteed one more home game in this marquee series of stellar performances with intense rivalry after they finish in Cleveland on Tuesday.